LUANDA/CHICAGO – Emiliano Cula starts to cry as his tiny fingers, curled into a tight fist, are stretched by a physical therapist to stimulate motor control.

Born in a poor neighborhood of Angolas capital Luanda, the 10-month old boy has microcephaly,a birth defect marked by a small head and serious developmental problems. He still cant sit upright and has difficulty seeing and hearing.

They dont know what caused it, Culas mother Marie Boa says, sheltering under a blue umbrella from the summer rains. The doctor said it might have been caused by a mosquito, but I dont know if thats true. The 18-year-old does not know whether her first child will ever walk or talk.

Cula is one of at least 72 babies born with microcephaly in Angola between February 2017 and May 2018, suspected victims of an emerging Zika outbreak. The cases have gone largely unreported, but an internal World Health Organization report reviewed by Reuters concluded inAprilthat two cases of a potentially dangerous strain of Zika confirmed in early 2017, along with the microcephaly cases identified since then, provided “strong evidences” of a Zika-linked microcephaly cluster in Angola.

(For a graphic on Angola’s microcephaly cluster, see https://tmsnrt.rs/2Ooz66X)

A lack of data and diagnostic testing along witha woefully inadequate Angolan health system has made tracking the outbreak difficult. Butnew findings from a research team in Portugal suggest it is the first on the African mainland involving the Asian strain of the disease.

It was the Asian strain that caused at least 3,762 cases of Zika-related birth defects, including microcephaly, in Brazil since 2015, as well as serious outbreaks in other Latin American countries. Doctors and researchers now fear it could spread from Angola to other countries on the African continent.

In an emailed response to questions, Angolas ministry of health said it had reports of 41 cases of Zika and 56 cases of microcephaly since January 2017, when it began gathering data. It was not immediately clear why the figures differed from the internal WHO report.

A lack of testing capacity means many cases of microcephaly go undetected, the ministry added, noting also that microcephaly has many causes.

Probably not all the cases of microcephaly can be attributed to Zika, the ministry said, listing a series of other potential causes such as syphilis and rubella.

The Angolan outbreak comes at a time when world attention has moved on from Zika, and most of the more than $1 billion in U.S. funding allocated to fight the disease has been spent.

We cant let our attention down on this, said Eve Lackritz, a physician who leads WHOs Zika task force. We have to stay vigilant and have a sustained response.

Brazils epidemic prompted WHO to declare a global public health emergency in February 2016 to investigate and ultimately identify the virus as a cause of microcephaly and other birth defects. Lackritz worries about a sense of complacency now that the crisis in Latin America has waned.

Our work is just starting, she said in a telephone interview. We need continued attention and investment to make sure we protect women and babies of the world.

She said there is still a great need for better diagnostics, greater lab capacity and programs to monitor birth defects.

Only one laboratory in Angola is currently testing for Zika, according to the health ministry. In order to improve the speed and accuracy of diagnoses, it said laboratories beyond the capital would need to be given testing capacity.

First discovered in Uganda’s tropical Zika forest in 1947,Zika circulated quietly for years, causing mild, flu-like symptoms in parts of Africa and Asia. Over time, the virus diverged into two genetically distinct lines the African and the Asian lineages – and neither was initially associated with large epidemics.

In late 2007, the Asian strain triggered the first large outbreak of Zika in humans on the island of Yap in Micronesia,infecting 73 percent of residents over age 3. In 2013, an outbreak in French Polynesia was the first linked to microcephaly.

The first lab-confirmed case of the Asian strain in Brazil was in 2015. By 2016 the virus, transmitted by the same mosquito that carries dengue and Yellow fever,had spread to nearly all of the states in Brazil, hitting hardest in the tropical Northeast. In its wake, thousands of babies were born with small, misshapen heads.

The African strain of Zika so far has not been linked to microcephaly, which is why health officials are so concerned about the Asian strains emergence in Angola, a Portuguese-speaking country that serves as a major travel hub for the rest of Africa.

Some health officials are intrigued by the fact that the only confirmed outbreaks of the Asian strain in Africa so far – in Angola on the continent and in Cape Verde, an island nation off the coast of Senegal – have been in countries that, like Brazil, are Portuguese-speaking. They are probing whether travel ties between Brazil and Portuguese-speaking African nations could have fostered the spread.

In Angola, it has been difficult to directly link microcephaly cases to Zika because of limited access to advanced testing that can confirm the disease even after the acute phase passes.

Four medical professionals who have worked with Angolas ministry of health said there was also little political will to investigate a Zika epidemic on the part of a government already dealing with deadly malaria outbreaks, as well as cholera and the potential threat of Ebola spreading from Democratic Republic of the Congo. Speaking on condition of anonymity due to the sensitivity of the matter, they added there was concern that an outbreak would require the government to establish costly programs for babies with microcephaly.

In Brazil, the epicenter of the largest and most severe Zika outbreak to date, the virus has now virtually disappeared. The high rate of infections two years ago has left much of the population immune, making it harder for the disease to spread.

Many families affected by the disease still struggle. Jackeline Vieira de Souza, 28, who lives in the Brazilian state of Pernambuco, describes a grueling daily routine for her son Daniel, born in 2015 with microcephaly: “My day to day is to wake up and take care of him. Therapies and doctors.”

Her hopes for Daniel are modest.

I have no dream of seeing him walk, run,” she said. “I only dream that at least he can eat better, breathe better.

In Angola, the journey of such mothers is just beginning. There is no public health program to help the children, who need regular physical therapy and other care.

Families are often referred to The Center for Neurosurgery and Treatment for Hydrocephaly in Luanda, even though the center lacks funding to address the problem. Families are expected to pay for consultations, costing between $7 and $21, which is far beyond the means of many in a country where 30 percent of the population lives on less than $1.90 per day.

The majority come once and never come back, said physiotherapist Adelina Martins. They dont have the means to keep coming.

On a recent Thursday, Luisa Alberto, 20, waited with her 3-month-old baby to see a doctor with dozens of other mothers sitting in a narrow corridor beneath a portrait of President Joo Loureno.

The baby’s father has refused to accept him, and Alberto is caring for her first child alone while trying to finish school. The child feeds but is developing slower than his peers.

It’s hard, Alberto said. He doesn’t play like the other babies.

(For a photo essay on Brazilan mothers of babies afflicted by Zika, go to https://reut.rs/2RRMEWN) 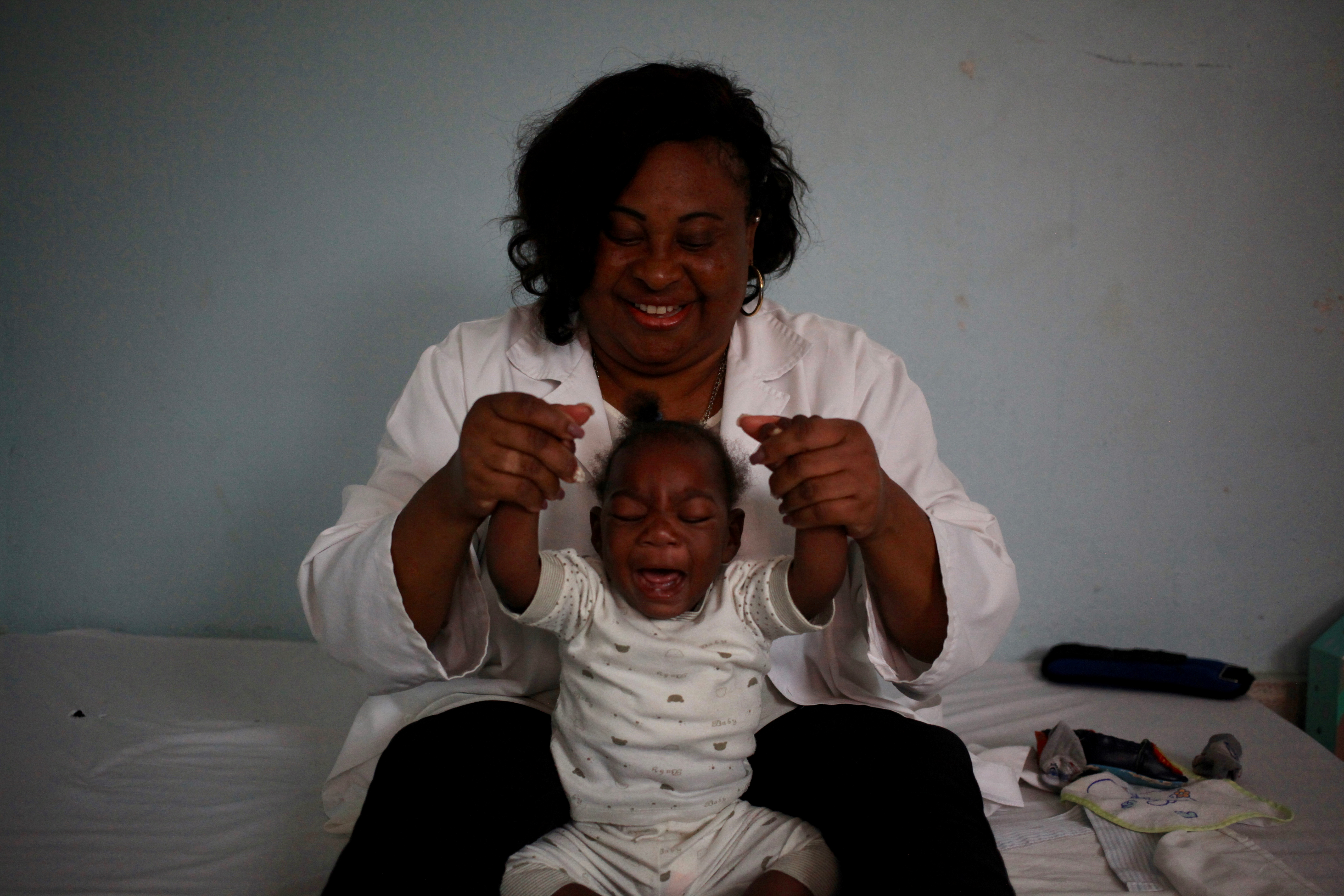 Special Report: A child poisoned in military housing, a family left in the dark