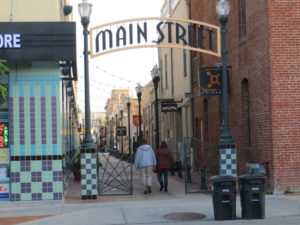 The downtown area saw major growth after San Mateo incorporated as a town in 1894, historic buildings from the 1890s to the 1930s surround the two block long walkway of Main Street which is halfway between B Street and Railroad Avenue.

A self guided Walking Tour is available through the Downtown San Mateo Association (DSMA) to learn more about the history and architecture of the downtown district.

The Downtown San Mateo Association (DSMA) is a coalition of San Mateo businesses who promote business and civic activity and work to improve the downtown experience for all. It is a 501(c) 6 non-profit corporation and all businesses that open in the downtown area are automatically enrolled through their business license fees. 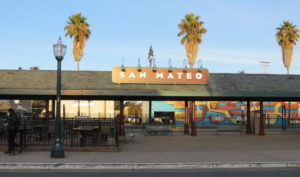 Fiesta Gardens, Hillsdale, 25th Avenue, and across El Camino the Borel, Aragon, Baywood, and Gramercy-Mounds El Cerrito neighborhoods surround the downtown San Mateo area. The streets between the 101 and ElCamino are mostly a grid system while other neighborhoods especially Park (San Mateo Park) offer streets than curve and intersect at different angles with landscaped islands.

Numbered streets continue on the other side of the 101 but only a few go beyond CalTrain’s railway. The exception is 3rd Avenue, is also named J Hart Clinton Drive in honor of the San Mateo Times Publisher, it follows along the Bay past Seal Point ending before the San Mateo bridge. 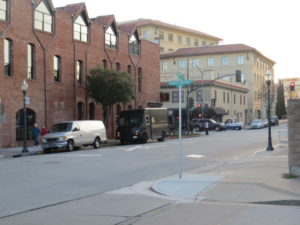 While the numbered streets continue up to 17th Avenue at least on the SW side of Railroad Ave to El Camino Real, the alphabetically named roads beginning with B Street then Railroad Ave, Claremont, Delaware (the NE border of Downtown San Mateo), Eldorado, Fremont, Grant, Humboldt and Idaho Streets run parallel to the bay.

On the other side of the 101 and west of El Camino the neighborhood street names do not follow a citywide pattern. The exception being the 25th Avenue Neighborhood with its numbered streets counting each block further away from downtown and some of those numbered streets continue into Beresford Park.

Public transportation information and more options to move around or tour the area.

San Mateo has a diverse range of educational options for children and adults.

San Mateo has a diverse range of educational options for children and adults.

The Ohlone tribe lived on the Peninsula for at least 4000 years before Spanish explorers arrived in the late 1700’s. In 1776 Father Font named the creek that they slept by “San Mateo Creek” by 1849 a stagecoach stop was established in San Mateo, and the Sawyer Creek trail provided a road between San Francisco and Half Moon Bay.

The Mexican Land Grants of 1835 designated a few large ranches on the peninsula. Rancho San Mateo, which included south Burlingame, all of Hillsborough, and north San Mateo was sold for four dollars an acre in the 1850’s. The rest of San Mateo was designated Rancho de las Pulgas land.

A railway from San Francisco to San Jose took 4 years to complete in 1864 the same year the first church (Roman Catholic) in San Mateo was completed. A few years later an Episcopalian church, built from stones taken from the Crystal Springs quarry, was completed. In 1889 the Crystal Springs dam was completed, a volunteer fire department was officially organized, and part of a large estate (William Howard) opened for subdivision allowing the middle class to move to San Mateo. On September 3, 1894 San Mateo incorporated as a town.

San Mateo became the place to build summer and weekend homes and became the home for some of the most powerful people in the West.

Work should begin in 2018 to construct a new three lane bridge for west bound traffic. The existing bridge will serve three lanes of eastbound traffic, and the toll plaza will be widened to provide six continuous travel lanes in both directions from route 101 to I-880. There are no plans to improve the highrise portion of the bridge in the next 20 years.