Lime is the New Blue

04/25/2018 – SAN MATEO – Last week the city council approved a plan to make local LimeBike the city’s approved bike sharing fleet. As the lime green bikes started showing up in the city limits from neighboring Burlingame, officials reached out to the city of Burlingame for their assessment and then to the San Mateo company. The switch from New York based Social Bikes will save the city $90,000 per year and will replace the blue bicycles parked along city streets with bright green and yellow ones.

LimeBike, founded in 2017, raised significant early venture funding from Andreessen Horowitz in March of that year, according to TechCrunch, which was followed by a B round of funding in October of the same year. This has helped LimeBike expand to 13 college campuses and over 50 US cities as well as several cities in Europe.

LimeBike provides green-colored bicycles equipped with GPS units and 3G connectivity. The bikes use solar panels to power the electronics, including a smart lock. A user with the LimeBike app may rent the heavy duty bicycles for $1 per every 30 minutes of ride time. Users can turn on the app to find a bike nearby, use a QR code to unlock the bike, and then lock it up at their destination. The bikes come with their own kickstand so they don’t have to be leaned up against buildings, bushes or each other to stay upright. 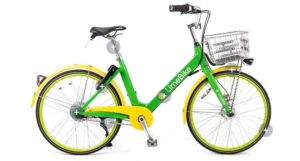 In addition to the bikes, the company will also roll out a fleet of scooters in San Mateo. It has been reported that San Francisco and other Bay Area cities have been grappling with nuisance complaints revolving around bike and scooter sharing programs, especially in regards to how users ride and park them. According to the San Jose Mercury news, Kathy Kleinbaum, the San Mateo deputy city manager, has stated that the city will try LimeBike for a year to assess the program.

Three Arrested for Car-Jacking and Robbery in San Mateo

Only 1 Home for Every 19 New Jobs in San Mateo

Central Park to be Site of Annual Pride Celebration