Central Park to be Site of Annual Pride Celebration

The 6th Annual San Mateo County Pride Celebration takes place on June 16th 2018 from 11 AM to 5 PM and Central Park in downtown San Mateo.  This event, organized by the Pride Initiative of San Mateo County, celebrates the LGBTQ community and its accomplishments.

This year’s theme is  “CELEBRATE, RESIST, UNITE” .   The Celebration is free and open to the public.

Gay Pride is celebrated each June in commemoration of the Stonewall Inn riots which took place in New York City in June, 1969 after the bar was raided by 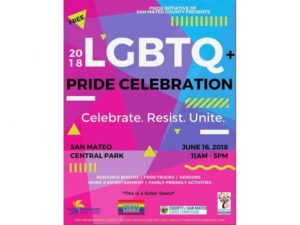 the police.  This incident proved to be the catalyst for the modern gay rights and advocacy movements.  This site has been declared an historic landmark.

The first actual Gay Pride marches occurred the following June in New York, Los Angeles and Chicago.  Due to the numbers of marches and festivals that followed, the entire month of June was proclaimed Gay Pride Month.  Most events around the country combine celebration, protest and political activism.  It is about human rights, civil rights and equality.

The San Mateo County Pride Celebration will feature live-stage entertainment, food vendors, resource booths and is also family friendly.  It’s purpose if to provide fun and entertainment while helping to foster connections within the community.