HAVANA – Cuban evangelical churches are collecting signatures to petition against a proposed constitutional amendment that would open the door to gay marriage, as part of an unusually strong non-governmental political campaign for the Communist-run island.

Cubans have been discussing the broader revamp of their Soviet-era constitution, as proposed by the Communist Party, at official block-level meetings nationwide since August.

Cuba’s churches, which enjoy more autonomy and influence than any other organization not affiliated with the Communist Party after the country expanded religious freedoms in the 1990s, have been stoking the controversy.

“We do not in any way approve Article 68 … because the Bible condemns it,” Pastor Lester Fernandez, 39, said to euphoric applause from around 500 people gathered at a Methodist Church in Havana one weekday morning earlier this month.

The Methodist Church is one of 21 evangelical denominations that this month started gathering signatures for a petition against the amendment.

They have also been plastering posters celebrating the “original family design, just as God created it” on their doors and windows, surprising many Cubans in a one-party country with tight control of public spaces.

Some analysts say the focus on gay marriage is crowding out discussion of other, more sensitive issues raised by the constitutional revamp, which maintains Cuba’s one-party socialist system as “irrevocable” while reflecting changes of recent years in its 224 articles.

“(Gay marriage) has functioned as a smokescreen to hide other realities,” said Isbel Diaz Torres, an activist for many issues, including LGBT rights.

Diaz Torres said he would be happy to finally be able to marry his boyfriend of 14 years if the constitution were approved and the necessary legal changes made.

But he wished Cubans would use the public consultation to address other issues like human rights.

The consultation has provoked an unusually open debate for Cuba, with some citizens, for example, calling for direct elections for president. Yet some topics, like the possibility of another political or economic system, appear to remain off-limits.

HALF A MILLION SIGNATURES?

Cuba persecuted gays in the early decades of Fidel Castro’s 1959 revolution, as it did religious people, rounding them up as counter-revolutionaries and placing them in labor camps.

Castro apologized in 2010 for this, and the country has made strides in LGBT rights in recent years, thanks partly to the advocacy of his niece, Mariela Castro, director of the National Center for Sex Education (CENESEX). Fidel Castro died in 2016.

If the constitution were approved with Article 68 in place, Cuba would be on track to joining Argentina, Brazil, Colombia and Uruguay in allowing same-sex couples to marry.

Given that it already guarantees other LGBT rights like free sex-change operations, this would make it an unlikely regional leader in LGBT rights, particularly in the Caribbean where homophobia is rife and some countries still have anti-sodomy laws.

However, the government has promised to take into account public suggestions for a final version to be put to a referendum early next year.

Meanwhile, more than 60 percent of Cuba’s 11.2 million citizens are baptized in the Roman Catholic Church, which has not weighed in on Article 68, but traditionally opposes same-sex marriage.

“If the topic of matrimony is not modified in the constitutional project, we will all vote against it,” said Leon Baez. “If this is approved, our nation is going to total destruction.”

This could put the government in a bind if it wants to prove the public consultation is a real example of participatory democracy, and not, as some opponents say, a fraud.

Cuban LGBT activists have run a countercampaign mainly on social media. But they complain the government does not officially recognize most independent activists and occasionally harasses them.

That means they, unlike Cuba’s churches, cannot do big campaigns.

“CENESEX is doing many actions,” said LGBT activist Ulises Padron. “But we can’t forget at the end of the day it’s an academic, scientific, teaching institution.” 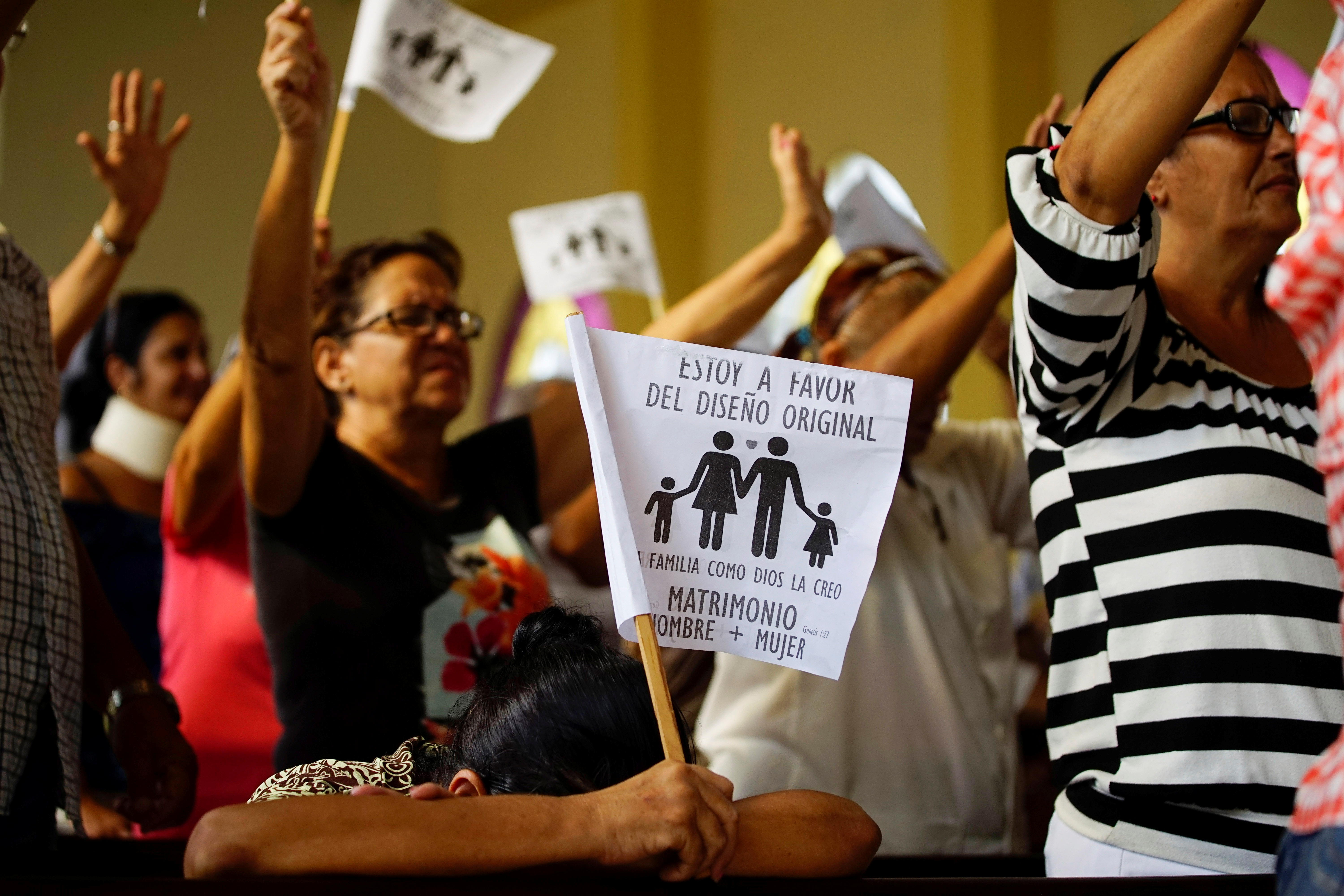