WASHINGTON/ESQUIPULAS, Guatemala – The organizer of a migrant caravan from Honduras was detained on Tuesday in Guatemala after U.S. President Donald Trump threatened to withdraw funding and aid from Honduras if the flow of migrants north to the United States was not stopped.

Guatemalan police officers detained Bartolo Fuentes, a former member of the Honduran Congress, from the middle of a large crowd he and three other organizers had led from San Pedro Sula, Honduras, since Saturday, bound for Mexico.

The Honduran security ministry said Fuentes was detained because he “did not comply with Guatemalan immigration rules” and would be deported back to Honduras in the coming hours.

Up to 3,000 migrants, according to organizers’ estimates, crossed from Honduras into Guatemala on Monday on a trek northward, after a standoff with Guatemalan police in riot gear and warnings from Washington that migrants should not try to enter the United States illegally.

Guatemala’s government has not given official figures for how many migrants are in the group.

“The United States has strongly informed the President of Honduras that if the large Caravan of people heading to the U.S. is not stopped and brought back to Honduras, no more money or aid will be given to Honduras, effective immediately!” Trump wrote on Twitter.

It was Trump’s latest effort to demonstrate his administration’s tough stance on immigration.

The message was driven home by Vice President Mike Pence, who wrote in a tweet that he had spoken to Honduran President Juan Orlando Hernandez.

“Delivered strong message from @POTUS: no more aid if caravan is not stopped. Told him U.S. will not tolerate this blatant disregard for our border & sovereignty,” Pence tweeted.

Hernandez said last month that cuts in U.S. support for Central America would hinder efforts to stem illegal immigration. He welcomed Chinas growing diplomatic presence in the region as an “opportunity.”

In an interview with Reuters, Hernandez lamented that prior U.S. commitments to step up investment in Honduras, Guatemala and El Salvador had been scaled back since Trump took office.

Honduras is one of a dwindling number of countries that still have formal diplomatic ties with Taiwan, an island nation off the Chinese coast that Beijing views as a renegade province.

Last week, Pence told Central American countries the United States was willing to help with economic development and investment if they did more to tackle mass migration, corruption and gang violence. Thousands of migrants have left the impoverished region in recent years.

The current group making their way north plan to seek refugee status in Mexico or pass through to the United States, saying they are fleeing poverty and violence.

The group more than doubled in size from Saturday, when it set off from northern Honduras in what has been dubbed “March of the Migrant,” an organizer said.

He was traveling with hoards of men, women and children, packs in hand, walking northward on a Guatemalan highway about 55 miles (89 km) from the border with Honduras.

Widespread violence and poverty prompt thousands of Central Americans, mainly from El Salvador, Honduras and Guatemala, to make the arduous journey north toward Mexico and the United States in search of a better life.

Guatemala said in a statement on Sunday that it did not promote or endorse “irregular migration.” Guatemalan police initially blocked migrants from reaching a customs booth, Reuters images showed.

Trump ran for president in 2016 on promises to toughen U.S. immigration policies and build a wall along the 2,000-mile(3,220-km) border with Mexico.

Illegal immigration is likely to be a top issue in Nov. 6 U.S. congressional elections, when Democrats are seen as having a good chance of gaining control of the House of Representatives from Trump’s fellow Republicans. 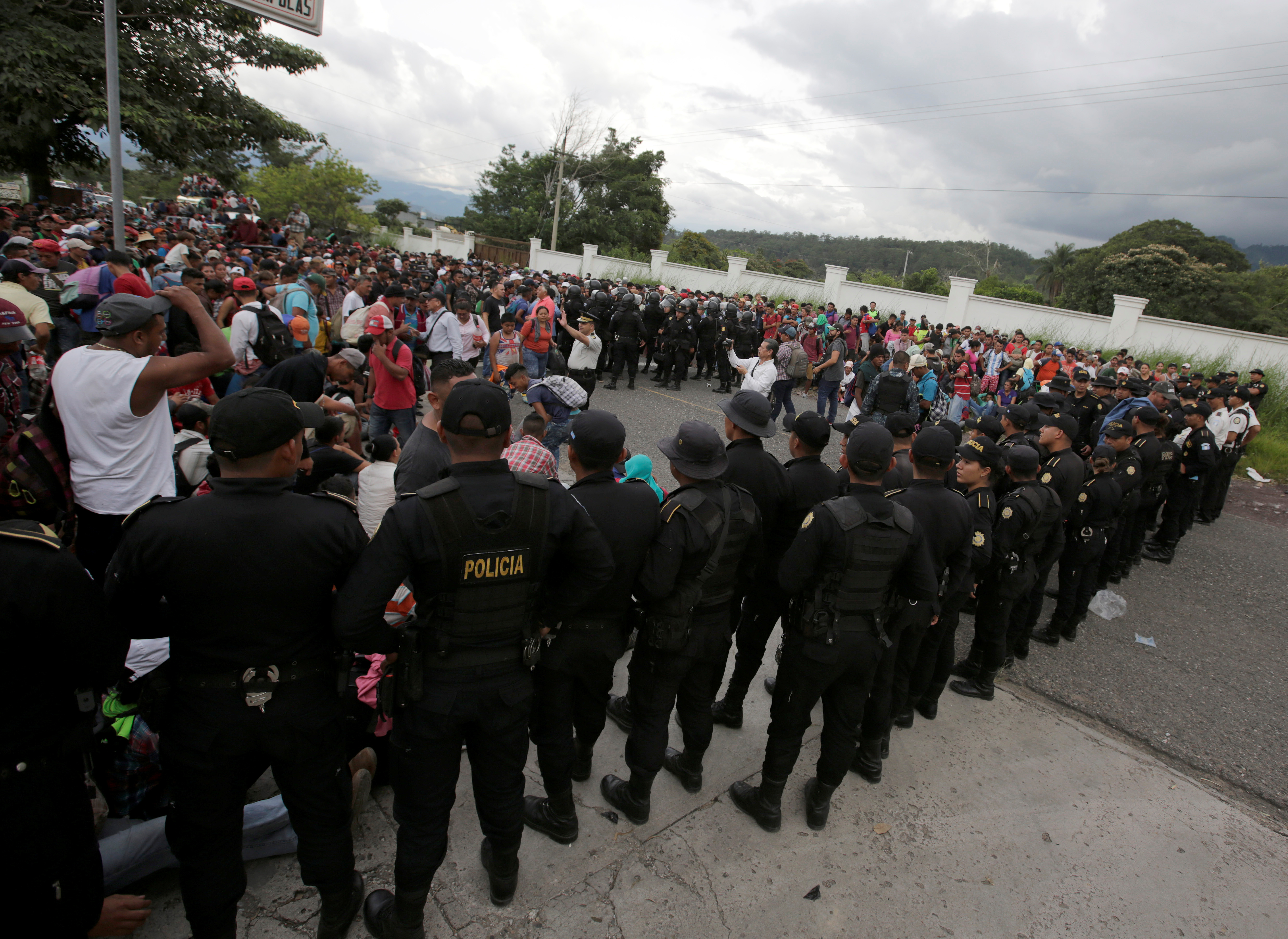