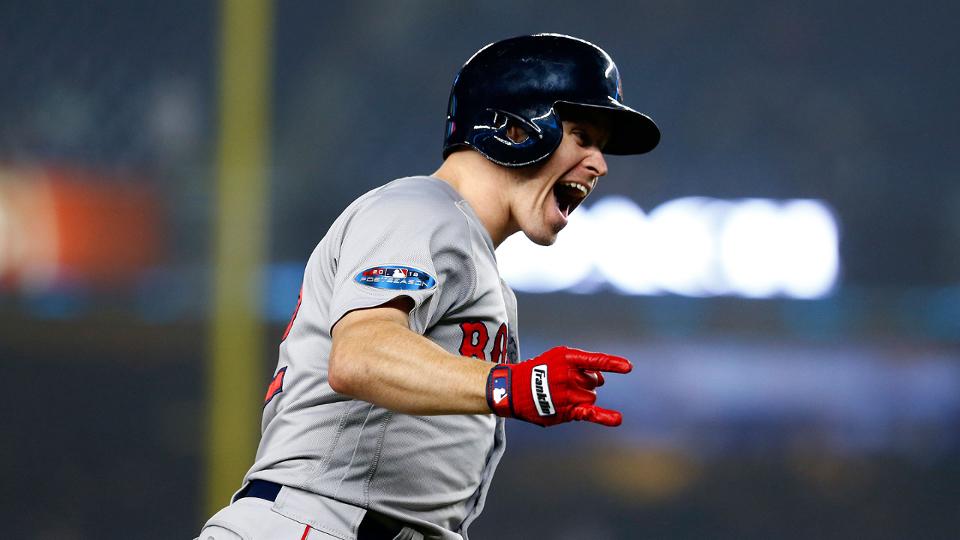 NEW YORK — When a baseball player is on the verge of doing something extraordinary — a no-hitter, a four-homer game, a cycle — his teammates tend not to speak to him. This is part of the sport’s unspoken code: better to leave an artist alone than risk disrupting him.

NEW YORK — When a baseball player is on the verge of doing something extraordinary — a no-hitter, a four-homer game, a cycle — his teammates tend not to speak to him. This is part of the sport’s unspoken code: better to leave an artist alone than risk disrupting him.


By the ninth inning of the Red Sox’s 16-1 drubbing of the Yankees in American League Division Series Game 3 on Monday night, Brock Holt was making that impossible. Holt bounced around the dugout, yelling at his teammates to give him one last crack at the plate. He urged at least one of them, any of them, to reach base.

Video: BOS@NYY Gm3: Cora on Holt hitting for the cycle

The odds were in his favor. So thoroughly defeated over the game’s first eight innings, the Yankees had turned to backup catcher Austin Romine to pitch the ninth. No one was more acutely aware of that fact than Holt, due to bat fourth with a single, a double and a triple already to his name.

“He wasn’t shy about it,” teammate Andrew Benintendi said. “Everybody was rooting for him.”

With two outs, Ian Kinsler worked a walk, providing Holt his chance. Romine’s first pitch came in at 79 mph, sinking toward the bottom of the zone. Holt abandoned all patience, all bat control, all semblance of proper technique. “I was trying to hit a home run,” he said. “That’s probably the first time I’ve ever tried to do that.” When the ball landed about a half-dozen rows up the right-field grandstand, Holt grinned back to the dugout where his teammates were erupting.

With that swing, Holt completed the first cycle in postseason history and the second of his career. Finishing 4-for-6 with three runs scored and five RBIs, he led the Red Sox to a 2-1 advantage in the ALCS, as he continued the process of redefining a career that injuries nearly destroyed.

An All-Star for the Red Sox in 2015, Holt appeared in just 158 games the next two seasons as he battled a concussion and resulting vertigo, then ankle, oblique and shoulder injuries. As Holt’s production dropped well below league average, his role on the team diminished. Then, this April, Holt began sparking, reestablishing himself as a bench bat capable of playing all four infield positions. He appeared in 109 games, batting .277. Long a favorite within the clubhouse walls, Holt was again a force on the field.

When he sat out Games 1 and 2 of the ALDS, Holt — one of Boston’s hottest hitters in September — figured manager Alex Cora would find a lineup spot for him before long. He just didn’t believe it would be Monday against Luis Severino, who had held him to one hit in 15 prior meetings.

Video: BOS@NYY Gm3: Holt on being put into starting lineup

Ignoring that, Cora texted Holt on Sunday evening, telling him he would be in the lineup.

“Are you sure?” Holt texted back.

Cora was certain, and even more so when Holt ripped a single up the middle to open Boston’s 11-man, seven-run, fourth-inning rally. Later that inning, Holt tripled into the right-field corner to plate two runs. Then, in the eighth, he doubled to center. More than three years removed from the first cycle of his career on June 16, 2015, Holt was on the cusp of doing it again.

Video: Brock Holt goes for the cycle twice in career

When Romine took the mound to open the ninth, Holt began chirping to his teammates. A high school pitcher, Romine had not thrown off a mound since that time. (Asked afterward to grade his performance, he answered simply: “F.”) Red Sox outfielder Jackie Bradley Jr. figured Holt had “great odds” to complete the 23rd cycle in franchise history because, in his words, “Brock’s the man.” Combining regular season and postseason, Holt is just the 26th player in history to hit for the cycle more than once.

• All 26 players who have hit for multiple cycles

Holt’s performance offered no counterargument. Sitting to Holt’s right in his postgame press conference, Benintendi gushed about a “great teammate” who “will do anything for you.” Cora implied that all Holt needed was a return to health. At one point, Holt unclasped his smartwatch from his wrist because it was buzzing too frequently with text messages.

Hurricane Michael strengthens to Category 2 storm on way to Florida