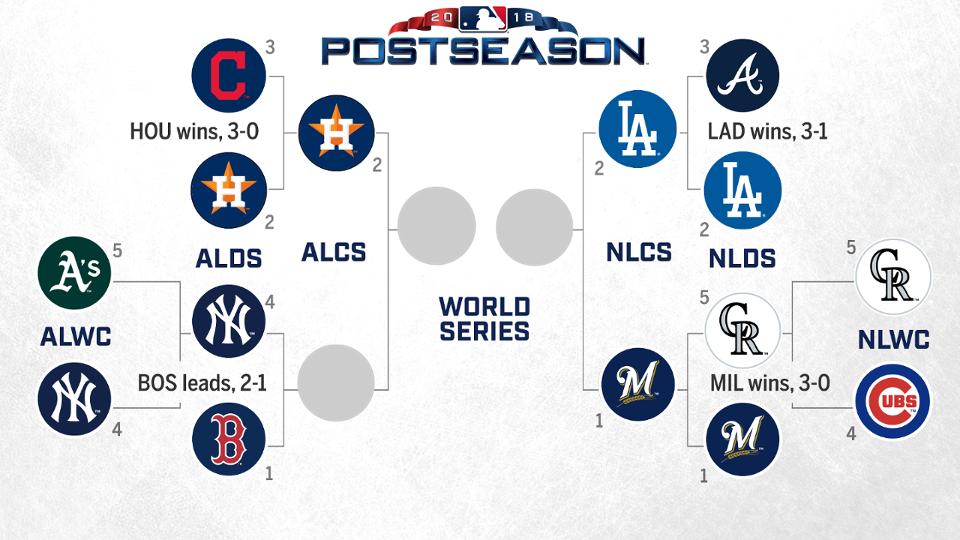 Three of the final four teams in this year’s postseason field are now set.

A pair of late hits from David Freese and Manny Machado gave the Dodgers a come-from-behind 6-2 win in Atlanta to complete a 3-1 series victory and clinch a third straight berth in the National League Championship Series. Last season’s NL pennant winners will match up against the Brewers in the NLCS starting Friday at Miller Park, with Milwaukee having completed an NLDS sweep of the Rockies on Sunday.

Three of the final four teams in this year’s postseason field are now set.

A pair of late hits from David Freese and Manny Machado gave the Dodgers a come-from-behind 6-2 win in Atlanta to complete a 3-1 series victory and clinch a third straight berth in the National League Championship Series. Last season’s NL pennant winners will match up against the Brewers in the NLCS starting Friday at Miller Park, with Milwaukee having completed an NLDS sweep of the Rockies on Sunday.

Boston now holds a 2-1 lead in the ALDS after a historic 16-1 drubbing of New York in Monday night’s Game 3, when Brock Holt hit for the first cycle in postseason history and Nathan Eovaldi pitched seven stellar innings to hand the Yankees their most lopsided postseason loss in team history. The winner of that series will meet the Astros, who routed the Indians, 11-3, behind two homers from George Springer to earn a trip back to the American League Championship Series.

Here is a full breakdown of where things stand, with key dates for the DS, LCS and World Series, as well as a complete breakdown of home-field advantage through the Fall Classic.

Yankees vs. Red Sox (BOS leads best-of-five series, 2-1)
Game 4 tonight, 8:07 p.m. ET on TBS
In the first playoff matchup between the Red Sox and Yankees in the Bronx since Game 7 of the historic 2004 ALCS, when Boston became the only team in MLB history to overcome a 3-0 series deficit, the Red Sox made plenty more history in their lopsided Game 4 triumph.

The Yankees will need to have a short memory to stave off elimination in tonight’s Game 4 behind veteran CC Sabathia, who will make his 23rd career postseason start. It won’t be an unfamiliar situation for Sabathia, who has made six starts in the playoffs with his team facing elimination, including two in 2017. He struck out nine in 4 1/3 innings in ALDS Game 5 against the Indians last year, but allowed three walks and five hits in 3 1/3 innings in the ALCS Game 7 loss to the Astros.

Boston will look to advance to the ALCS for the first time since 2013 behind the right arm of Rick Porcello, who has allowed seven earned runs in 7 1/3 innings in his two previous postseason starts with the Red Sox. He has had success in two of his three starts against the Yankees this season, with seven shutout innings on April 12 and a complete-game one-hitter on Aug. 3.

Astros vs. Indians (HOU won, 3-0)
Francisco Lindor‘s fifth-inning homer gave the Indians a lead in front of a rocking crowd Monday at Progressive Field, but the Astros’ offense took over from there. Marwin Gonzalez knocked a bases-loaded double — his second important extra-base hit of the series — in the seventh to put Houston ahead, and homers by Springer and Carlos Correa gave the defending champions some breathing room.

The Astros are the first AL team since the 2010 Yankees to make it back to the LCS in the year following a World Series title. They’ll now have plenty of time to rest up before Saturday, when their ace, Justin Verlander, will presumably take the ball for Game 1. Houston would go to Fenway Park for that matchup should the Red Sox win their ALDS matchup, and would host the Yankees if they move on.

Rockies vs. Brewers (MIL won, 3-0)
The Brewers kept rolling Sunday, winning their 11th straight game in another shutout. Wade Miley extended Milwaukee’s dominant pitching with 4 2/3 scoreless frames in Game 3. The Brewers pitching staff held the Rockies scoreless in 27 of 28 innings of the NLDS, including 12 2/3 innings from their starters.

Jesus Aguilar got Milwaukee’s offense going Sunday with a solo homer in the fourth, his first postseason hit after an 0-for-7 start, and Orlando Arcia and Keon Broxton went back-to-back for home runs off Rockies closer Wade Davis in the ninth.

The Brewers last advanced to the NLCS in 2011 with a five-game NLDS win over the D-backs. They lost a six-game NLCS to the eventual World Series champion Cardinals. They will host the Dodgers on Friday in Game 1 of the NLCS.

Braves vs. Dodgers (LAD won, 3-1)
The Dodgers added Machado prior to the non-waiver Trade Deadline and acquired Freese, a former postseason hero for the Cardinals, in a waiver trade a month later. Both came through big in the Dodgers’ series-clinching 6-2 win over the Braves on Monday at SunTrust Park, as the Dodgers erased a 2-1 deficit with a pinch-hit, two-run single by Freese in the sixth and added three insurance runs on Machado’s second homer of the postseason an inning later.

Kurt Suzuki also drove in two runs with a pinch-hit single for the Braves, who have been eliminated by the Dodgers in their last two postseason appearances and haven’t won a playoff series since 2001.

Last season, the Dodgers beat the Cubs in five games in the NLCS before losing the World Series to the Astros in seven games. Two years ago, the Dodgers lost the NLCS to the eventual World Series champion Cubs in six games. They open this year’s NLCS on Friday at Miller Park against the Brewers.

NL Championship Series (2-3-2 format)
Game 1 is Friday on FOX/FS1 (time TBD)
Home-field advantage in this best-of-seven series (Games 1-2 and 6-7) goes to the Division Series winner with the higher regular-season winning percentage, but never a Wild Card team. That will be Milwaukee, which swept the Rockies in the NLDS and finished the regular season as the NL’s top seed after defeating the Cubs in a one-game tiebreaker to win the Central. The Brewers will host the Dodgers in the opener Friday at Miller Park.

World Series presented by YouTube TV (2-3-2 format)
Game 1 is Tuesday, Oct. 23 on FOX (time TBD)
Home-field advantage in the World Series is no longer based on the result of the All-Star Game. Home field (Games 1-2 and 6-7) in this best-of-seven series will go to the team with the higher regular-season winning percentage, regardless of whether the team is a Wild Card winner or a Division Series winner.

If the two pennant winners go into the Fall Classic with identical regular-season records, the first tiebreaker will be head-to-head record in the regular season. If the teams did not play during the season during Interleague Play, the tiebreaker would go to the team with the better overall record against teams in its own division. If that were also a tie, the tiebreaker would be intraleague records (the NL club’s record vs. NL teams and the AL team’s record vs. AL teams).

Below are the World Series home-field advantage seedings, which are based on the regular 162-game schedule and do not factor in the two tiebreaker games played in the NL (aka Game 163).

Pope compares having an abortion to ‘hiring a hit man’