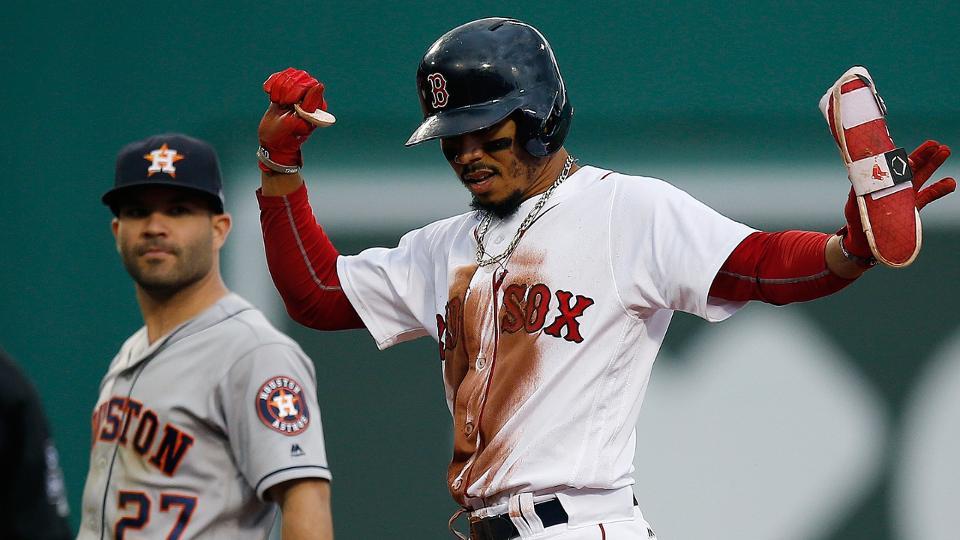 The Red Sox stormed to 108 wins in 2018, setting a franchise record and holding off a 100-win Yankees team for the American League East title.

The defending World Series champion Astros stormed to 103 wins, also setting a franchise record and holding off a 97-win A’s team to capture the AL West.

The Red Sox stormed to 108 wins in 2018, setting a franchise record and holding off a 100-win Yankees team for the American League East title.

The defending World Series champion Astros stormed to 103 wins, also setting a franchise record and holding off a 97-win A’s team to capture the AL West.

Now these two worthy adversaries meet in the postseason for the second year in a row, this time in the AL Championship Series, beginning Saturday at Fenway Park. Boston advanced with Tuesday’s victory over the Yankees in Game 4 of the AL Division Series, joining Houston, which completed a sweep in Cleveland on Monday.

The two clubs’ total of 211 combined regular-season wins ties a record for LCS opponents, previously set by the Mariners (116) and Yankees (95) in 2001. It’s also a rare example of teams with MLB’s two best regular-season records meeting with a league pennant on the line.

That’s something that had happened just eight previous times since the LCS round was created, when MLB entered the Divisional Era in 1969. Only two of those matchups had taken place since the Wild Card Era began in ’95, forcing teams to get through another postseason round before the LCS.

Here is a look back at each of these powerhouse clashes:

2009 ALCS: Yankees (103 wins) beat Angels (97 wins)
The last time the AL’s top two teams met in the ALCS, the series did not disappoint. It didn’t go the distance — the Yankees won in six games — but provided plenty of thrills with three one-run decisions, a pair of extra-innings bouts that ended in walk-off fashion. Yanks ace CC Sabathia helped New York to an early lead by holding the Angels to one run over eight innings before star closer Mariano Rivera shut the door in Game 1, and Alex Rodriguez powered New York’s Game 2 victory with a walk-off homer against Halos closer Brian Fuentes in the 13th inning.

The Angels walked off in an 11-inning Game 3, but the Yankees maintained their lead with another stellar eight-inning performance from Sabathia in Game 4. The Yanks celebrated their 40th AL pennant after Game 6, in which Andy Pettitte hurled 6 1/3 frames and Rivera converted a six-out save. New York went on to defeat the Phillies in six games to win their 27th and most recent World Series title.

Video: ALCS Gm 6: Pettitte too much for Angels in clincher

2007 ALCS: Red Sox (97 wins) beat Indians (97 wins)
The Red Sox got off to a strong start, scoring eight runs against the Indians’ CC Sabathia en route to a Game 1 victory, but then saw their early edge slim away as Cleveland rallied for three straight victories. Facing elimination, Boston turned to Josh Beckett in Game 5. Taylor Swift was scheduled to perform the national anthem at Jacobs Field, but when a scheduling issue prompted a cancellation, the Tribe unknowingly provided Beckett with an unusual motivator, replacing Swift with country singer Danielle Peck, his ex-girlfriend. Beckett responded by turning in a dominant 11-strikeout, eight-inning performance to send the series back to Boston.

J.D. Drew hit a grand slam as Boston won, 12-2, in Game 6, then the Red Sox completed their dramatic comeback with another lopsided win in Game 7. The Tribe had an opportunity to tie Boston in the seventh inning, but third-base coach Joel Skinner gave a controversial stop sign to Kenny Lofton on a single down the third-base line that ricocheted into shallow left field. It left Indians fans with a forever “what if” moment that Skinner later regretted. In the Fall Classic, the Red Sox swept the Rockies for their second title in four seasons.

1992 National League Championship Series: Braves (98 wins) beat Pirates (96 wins), but both ALCS teams had 96 wins as well
The Braves, near the beginning of their run of winning 14 division titles in 15 years, narrowly survived a seven-game series with the Pirates to return to the World Series for a second consecutive year. Pittsburgh was looking to break through after back-to-back NLCS defeats to the Reds and Braves in 1990 and ’91. The Braves took three of the first four games, but the Bucs staved off elimination to force a Game 7. In the do-or-die finale, Atlanta trailed 2-0 heading into the ninth. Terry Pendleton got the Braves started with a leadoff double, then David Justice and Sid Bream subsequently reached on an error and walk to load the bases. Pendelton scored Altanta’s first run on a lineout, then pinch-hitter Francisco Cabrera put the Braves ahead with a two-run single. Bream beat Barry Bonds’ toss home to score the winning run and punch the Braves’ ticket to the Fall Classic, where they lost in six games to the Blue Jays.

1986 NLCS: Mets (108 wins) beat Astros (96 wins)
The Mets won a franchise-record 108 games in 1986, and were the favorite to win their second title. But they ran into trouble against Astros ace Mike Scott. The right-hander was coming off an NL West-clinching no-hitter in the Astros’ final game of the regular season, and picked up right where he left off with a five-hit, 14-strikeout shutout in the opener, then earned a complete-game victory in Game 4. The Mets thought Scott was doctoring the ball that season, and whether he was cheating or not, the veteran hurler was clearly in their heads.

But the Mets won every game in which Scott did not pitch, including two walk-offs — New York won on Lenny Dykstra’s two-run homer in Game 3 and Gary Carter’s 12th-inning single in Game 5 — and a 16-inning classic in Game 6. Houston was three outs from forcing a Game 7 when the Mets battled back from a 3-0 hole to tie the game in the ninth. In the 14th, it was the Mets who were on the verge of advancing only to have Billy Hatcher hit a game-tying homer off the left-field foul pole. The Mets broke through again in the 16th, plating three runs for a 7-4 edge, and they needed every one of them as Houston cut that lead to one in the home half before Jesse Orosco, who had blown his save opportunity in the 14th, redeemed himself by striking out Kevin Bass to clinch the pennant. Scott was named series MVP despite pitching for the losing team, and the Mets went on to defeat the Red Sox in the World Series.

1983 ALCS: Orioles (98 wins) beat White Sox (99 wins)
Baltimore captured its third championship in an 18-year span in 1983, beating the Phillies in the World Series. Before that, the Birds had to take down a surprise White Sox club — managed by Tony La Russa — that was making its first postseason appearance since 1959. Chicago actually took Game 1 in Baltimore behind LaMarr Hoyt’s one-run complete game, before the Orioles evened the series on Mike Boddicker’s 14-strikeout shutout. Back in Chicago, the O’s got a first-inning three-run homer from Eddie Murray and soared to an 11-1 Game 3 blowout. Game 4 was a classic, remaining scoreless through nine before Baltimore’s decisive three-run 10th, jump-started on Tito Landrum’s go-ahead solo homer. A young Cal Ripken Jr., that year’s AL MVP Award winner, led the Orioles with six hits in the series.

1976 NLCS: Reds (102 wins) beat Phillies (101 wins)
Before sweeping the Yankees for their second straight World Series championship, the Big Red Machine did the same to a Phillies club that set a franchise record for victories. Sparky Anderson’s club won Game 1 at Philly behind Don Gullett, who allowed one run in eight innings on the mound while going 2-for-4 with three RBIs at the plate. The Reds then erased a 2-0 deficit with a four-run sixth inning to win Game 2, 6-2, before shifting the series back home. In Game 3 at Riverfront Stadium, the Phils held a 6-4 edge going into the bottom of the ninth before George Foster and Johnny Bench tied it with back-to-back homers. Ken Griffey Sr.’s walk-off single later in the inning sent Cincy on to the Fall Classic.

1972 NLCS: Reds (95 wins) beat Pirates (96 wins)
Just one game separated these teams during the regular season, and it showed in October. The Reds outscored the Pirates just 19-15, including two games decided by a single run. After splitting the first two games in Pittsburgh, the series shifted to Cincinnati for Game 3, as the Bucs rallied from a 2-0 deficit to win, 3-2. But the Reds cruised to a 7-1 victory in Game 4 behind Ross Grimsley’s complete game, then rallied in the ninth inning of Game 5. After Johnny Bench began the frame with a game-tying homer pinch-runner Foster scored the walk-off run on a wild pitch by Bob Moose. Cincinnati couldn’t quite finish the job in the World Series, however, falling to Oakland in seven games.

1971 ALCS: Orioles (101 wins) beat A’s (101 wins)
In the third year of the Divisional Era, both of these teams won their divisions by at least 10 games. Baltimore then swept this heavyweight postseason fight, though all three games were competitive. Paul Blair came through with a go-ahead two-run double off Vida Blue in the seventh inning of Game 1, Elrod Hendricks smacked a go-ahead solo homer off Catfish Hunter in the seventh inning of Game 2, and Brooks Robinson delivered a go-ahead two-run single in the fifth inning of Game 3. Earl Weaver’s O’s used a total of four pitchers in the series, with both Mike Cuellar and Jim Palmer delivering complete games. They went on to drop a dramatic seven-game World Series to the Pirates.

Chad Thornburg is a reporter for MLB.com based in Los Angeles.