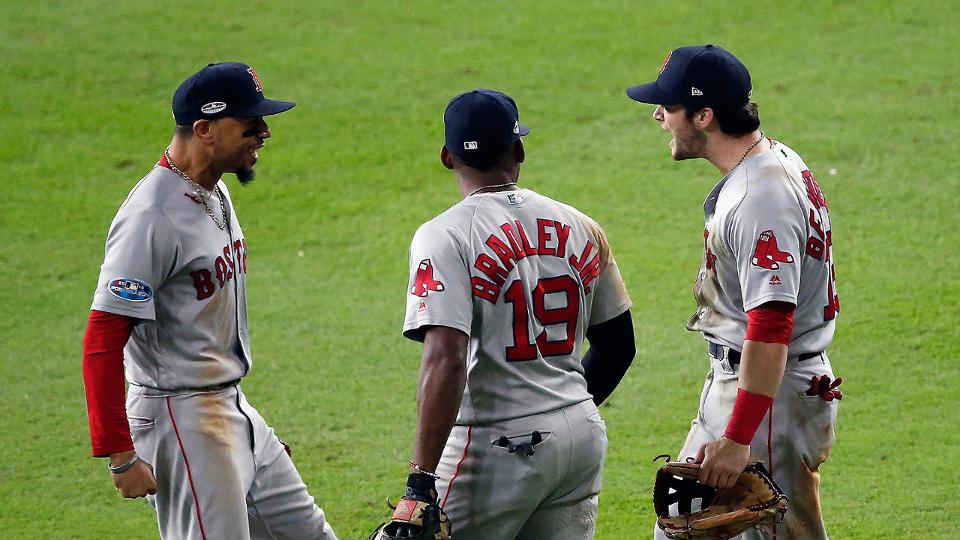 HOUSTON — You will never watch a better baseball game, and isn’t that the bottom line? Sometimes, this sport — particularly this sport in October — delivers something so good we need a day or two to roll it around in our hearts and minds and appreciate what we’ve just witnessed.

The Red Sox and Astros played this one like a Game 7 because, all things considered, it may end up being almost that important. We may look back a few days from now and see that the American League Championship Series was decided on Wednesday night.

HOUSTON — You will never watch a better baseball game, and isn’t that the bottom line? Sometimes, this sport — particularly this sport in October — delivers something so good we need a day or two to roll it around in our hearts and minds and appreciate what we’ve just witnessed.

The Red Sox and Astros played this one like a Game 7 because, all things considered, it may end up being almost that important. We may look back a few days from now and see that the American League Championship Series was decided on Wednesday night.

That’s why at-bats were tense and long, and a line of relievers — 10 in all — paraded in from both bullpens. Plays that were made — and plenty that weren’t — will gnaw through the offseason.

So hats off to the Red Sox, who twice came from behind and then held on for dear life at the end to beat the Astros, 8-6, in Game 4 of the ALCS at Minute Maid Park.

Boston leads the best-of-seven series, 3-1, and is one victory from its 14th AL pennant. Don’t turn out the lights just yet. Boston’s pitching has been pushed to the limit — David Price will start Game 5 on short rest tonight — and the Astros have aces Justin Verlander and Gerrit Cole lined up for Games 5 and 6.

First, though, let’s appreciate Game 4 for all its spectacular moments and captivating theater with 10 plays that helped make it an instant classic:

1. Andrew Benintendi flies through the air
This game ended the only way it could: with the Red Sox left fielder making a sweet diving catch of an Alex Bregman liner with the bases loaded and two outs in the bottom of the ninth inning. How perfect is that? Had he not come up with the ball, the Astros probably win, and the ALCS looks completely different. On an evening when bodies flew here, there and everywhere, flipping over rails, diving across foul lines, when both teams did themselves proud, Benintendi saved the best for last. If you hear a rumor that Red Sox radio broadcaster Joe Castiglione got so excited he fell out of his seat, you didn’t hear it here.

2. Jose Altuve‘s home run that wasn’t
The Astros second baseman hit a ball just over the wall in right field with a runner on base in the bottom of the first inning. Home run, right? Hey, it’s complicated. As Red Sox right fielder Mookie Betts leaped near the wall in an attempt to steal the home run, his glove appeared to come into contact with at least a couple of fans. Umpire Joe West believed Betts would have caught the ball if not for the fans and ruled fan interference. A replay review supported his call. The Astros did not agree. More >>

Video: Must C Curious: Altuve out on fan interference

3. Mookie Betts, Gold Glover
Don’t run on Mookie. Those two Gold Gloves should be a reminder of that. Astros outfielder Tony Kemp learned that lesson when he led off the bottom of the eighth with a single to right and attempted to stretch it into a double. Betts made a laser throw to shortstop Xander Bogaerts to get Kemp. The Astros trailed by three at the time, and Betts’ play probably saved the Red Sox a run.

4. Steve Pearce head over heels into the dugout
No play typified the urgency of this game more than the Boston first baseman flipping over the railing and landing on his back in the Astros dugout in pursuit of a Josh Reddick foul pop in the seventh with the Red Sox leading, 7-5. He didn’t get to the ball. Instead, he gave Red Sox Nation a highlight moment to appreciate. More >>

5. Jackie Bradley Jr. hits another one
The Red Sox center fielder is making October his personal stage. The Astros had just taken a 5-4 lead in the bottom of the fifth when Bradley came to bat with a runner on base and two outs in the top of the sixth. You can guess the rest. His two-run home run gave him nine RBIs in the ALCS and the Red Sox a lead they never relinquished. More >>

6. Reddick keeps the Astros in the game
We had so many spectacular defensive plays in this one that they started to feel routine. Reddick made a huge one with a diving grab of a Betts liner in the top of the ninth inning with the bases loaded. It cost the Red Sox at least one run and kept the Astros within striking distance for the bottom of the inning.

7. Kemp and a different kind of home run
We love home runs that are these big booming shots that rattle the glass in windows and disappear into the night air. That’s not the kind the Astros left fielder hit in the bottom of the fourth inning. He looped a Rick Porcello pitch just over the wall and inside the right-field foul pole. Statcast™ clocked its exit velocity at 89.7 mph, the softest home run in the postseason since the technology arrived in 2015. Still counted. More >>

8. Craig Kimbrel‘s grit
The Red Sox closer got the final six outs to do something he’d never done in his nine-year Major League career. That would be a save of more than four outs. Never mind that he has allowed a run in four straight appearances or that looks like someone who could use a couple of days to catch his breath. He helped get the Red Sox to the threshold of a dream.

9. Josh James and 102 mph
The former 34th-round Draft choice of the Astros burst onto the scene late in the season after blowing away hitters in the Minor Leagues. When Astros manager AJ Hinch called upon him in the top of the third inning, his first three pitches were 100.9 mph, 101.2 mph and 102.4 mph. Does that qualify as electric stuff? He’s the first Astros pitcher to hit 102 mph in the pitch tracking era (2008-present). More >>

10. Altuve is doing that Willis Reed thing
He refuses to give in to a knee injury that has left him with a pronounced limp and forced Hinch to use him as a DH. Yet he still continues to hit and hustle. He legged out a third-inning double and hit the second-base bag so hard he needed a few minutes to walk off the pain and remain in the game. He hustled home on a Reddick single moments later.

Richard Justice has been a reporter for MLB.com since 2011. Read his columns, listen to his podcast and follow him on Twitter at @RichardJustice.