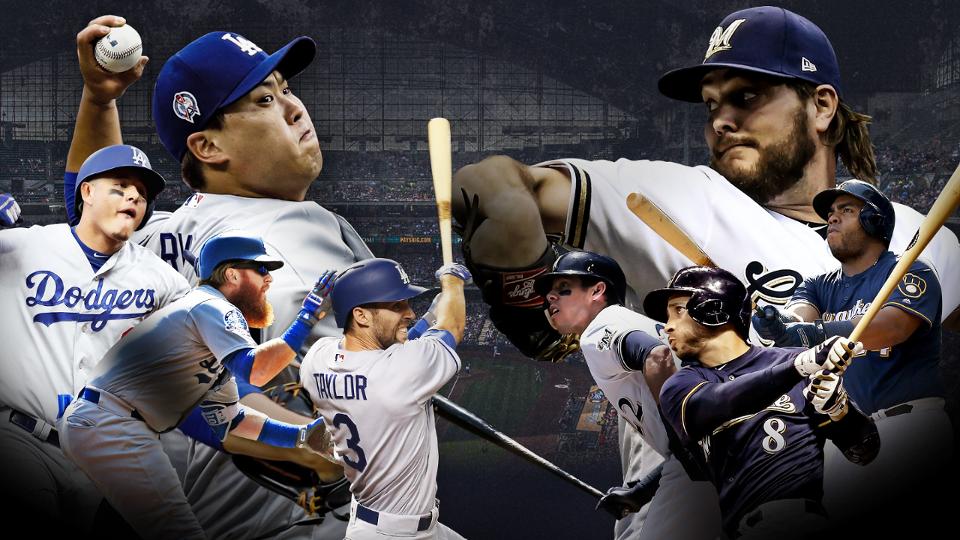 MILWAUKEE — The Dodgers can clinch their second consecutive National League championship on Friday with a win over the Brewers in Game 6 at Miller Park. The last time Los Angeles won back-to-back pennants was 1977-78. Milwaukee will be looking to force a Game 7 and keep its hopes alive for a first pennant in 36 years.

Left-hander Hyun-Jin Ryu will start for L.A. against fellow southpaw Wade Miley, who faced one batter in Game 5 as a decoy starter to influence the Dodgers’ lineup construction. Miley will become only the fourth pitcher to start consecutive postseason games.

MILWAUKEE — The Dodgers can clinch their second consecutive National League championship on Friday with a win over the Brewers in Game 6 at Miller Park. The last time Los Angeles won back-to-back pennants was 1977-78. Milwaukee will be looking to force a Game 7 and keep its hopes alive for a first pennant in 36 years.

Left-hander Hyun-Jin Ryu will start for L.A. against fellow southpaw Wade Miley, who faced one batter in Game 5 as a decoy starter to influence the Dodgers’ lineup construction. Miley will become only the fourth pitcher to start consecutive postseason games.

The teams split the first two games of the series in Milwaukee, and the Dodgers won two of three at Dodger Stadium to take a 3-2 lead in the best-of-seven series.

What might the starting lineups look like?
Dodgers: It’s easier to hit the winning lotto numbers than to guess Dave Roberts’ daily lineup, but given that it’s the same opposing starter for a second straight game, we might have some idea. Here goes:

Brewers: With the offense continuing to sputter, will Craig Counsell consider any changes to this lineup he submitted against Ryu in Game 2? He did announce Thursday that Christian Yelich will remain in the No. 2 hole.

Who are the starting pitchers?
Dodgers: Ryu (7-3, 1.97 ERA) — who held the Brewers scoreless the first four innings of Game 2 before allowing a homer, single and double to end his start in the fifth — has a chance to clinch the Dodgers’ second consecutive NL pennant. Ryu struck out four without a walk and got a no-decision.

Brewers: The Brewers spent the better part of their three days in Los Angeles parading Miley (5-2, 2.57 ERA) as their starter for Game 5 on short rest, but the real plan was always to start him in Game 6, on one extra day of rest. That became clear to all when Counsell used Miley as an “opener” Wednesday, with Miley walking leadoff man Bellinger before giving way to Brandon Woodruff.

The Brewers are expected to ask for more from Miley on Friday, but how much more is unclear given the paramount importance Counsell has placed on platoon matchups this postseason. When allowed a leash, Miley has been excellent this October. He is unscored upon across 10 1/3 innings, including 5 2/3 against the Dodgers in a Game 2 outing in which Miley chipped in two hits.

Video: Counsell on removing Miley after one batter in Game 5

How will the bullpens line up after the starter?
Dodgers: With a day off to travel, Kenley Jansen will be rested by Friday after pitching two innings Tuesday night and getting the final out on Wednesday. Pedro Baez pitched another scoreless inning and could be promoted to setup man over Kenta Maeda. Caleb Ferguson is the situational lefty, and Ryan Madson gets the call to bail the team out of jams with runners on.

Brewers: Here is where the Brewers look to their Game 5 loss and see a silver lining. Though they’re facing elimination, Milwaukee will have all of its top relievers ready and available following Thursday’s off-day. Josh Hader and Corey Knebel will be on two days’ rest, and Jeremy Jeffress will be on three. After appearing in each of the Brewers’ first five postseason games, Jeffress is yet to appear in either of the past two.

“We’re going back home, to me, in a position of strength,” Counsell said. “We have a great opportunity. We’ve got Wade and Jhoulys Chacin lined up to begin the games, and I guess Jhoulys could be involved in Game 6 if we need him. But we’ve got two starters lined up, and we’ve got a bullpen that’s going to get a day off, and some of our key guys are going to get multiple days off and be ready to go in a two-game stretch where we can use them.

“We’re in a good spot, man. We’re going home. And I know you’re going to play, ‘What if we could have captured another one of these games?’ But we’re still going home and have a chance with this thing with a bunch of guys in really good shape.”

Are there any relievers who are unavailable?
Dodgers: No.

Brewers: Woodruff is likely out, given the 5 1/3 innings he threw in Game 5. Besides that, it should be all hands on deck for the Brewers, potentially including tentative Game 7 starter Chacin.

Any injuries of note?
Dodgers: No.

Video: Dave Roberts on the bullpen’s success this playoffs

Who is hot and who is not?
Dodgers: Barnes struck out three times in Game 5, but he also delivered the biggest hit and is likely to continue starting ahead of Yasmani Grandal. Baez has seven strikeouts with no runs in 4 1/3 innings in the NLCS after striking out three in 2 1/3 scoreless innings of the NL Division Series. Going back to Sept. 11, he hasn’t allowed a run in his last 14 1/3 innings with 15 strikeouts. Enrique Hernandez is 0-for-10 with five strikeouts.

Brewers: The Brewers still have way too many “nots” in their lineup, starting with Yelich, who is 3-for-20 without an extra-base hit in the NLCS after going 0-for-4 in Game 5. Moustakas is also struggling to the tune of 2-for-21.

“As an offense, we have to find a way to score some runs,” said Yelich. “With the off-day, we can kind of just flush it. Really focus being at home and lock it in in these next two.”

Anything else fans might want to know?
The Dodgers have a 5-1 record when taking a 3-2 lead in a best-of-seven postseason series. The Brewers find themselves in a spot similar to the 2011 NLCS against the Cardinals, having split the first two games before losing two of three on the road. They’ll aim for a different outcome this time; the ’11 club lost Game 6 at Miller Park to eventual World Series champion St. Louis.