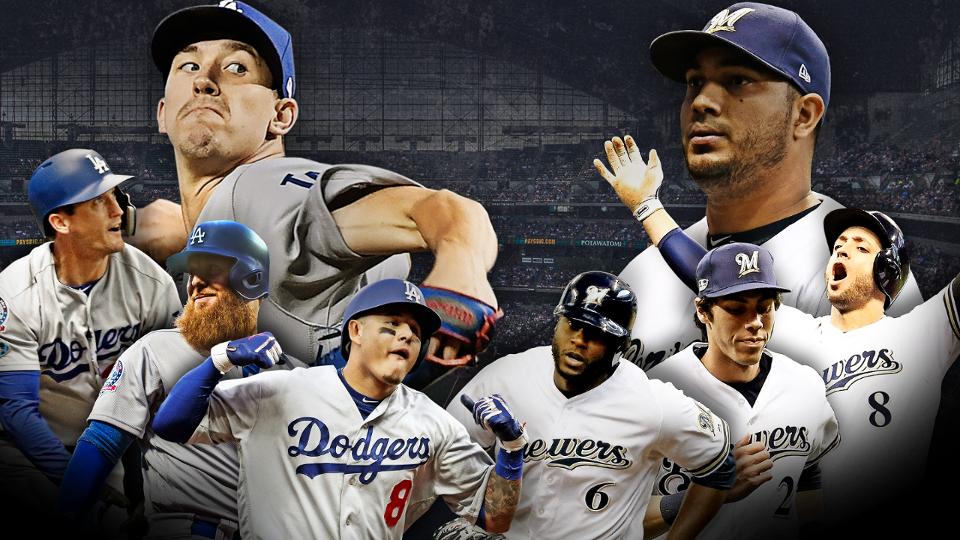 MILWAUKEE — The Dodgers and Brewers are taking this National League Championship Series the distance with a decisive Game 7 on Saturday at Miller Park, the winner going to the World Series, the loser going home. Eight months of work boiled down to one night.

The game will be a rematch of Game 3’s starting pitchers, rookie Walker Buehler for Los Angeles and veteran Jhoulys Chacin for Milwaukee. The Dodgers are 3-4 all-time in Game 7s, the Brewers 0-1, while the home team is 6-3 in NLCS Game 7s.

MILWAUKEE — The Dodgers and Brewers are taking this National League Championship Series the distance with a decisive Game 7 on Saturday at Miller Park, the winner going to the World Series, the loser going home. Eight months of work boiled down to one night.

The game will be a rematch of Game 3’s starting pitchers, rookie Walker Buehler for Los Angeles and veteran Jhoulys Chacin for Milwaukee. The Dodgers are 3-4 all-time in Game 7s, the Brewers 0-1, while the home team is 6-3 in NLCS Game 7s.

Here are possible starting lineups and answers to the most frequently asked questions about Game 7:

Who are the starting pitchers?
Dodgers: Buehler pitched better than his Game 3 line (four runs, seven innings) looked, and he gets another chance in a rematch with Chacin. Four of Buehler’s innings were scoreless, but he also allowed four extra-base hits — a homer to Arcia, a triple to Shaw and doubles to Braun and Kratz. All factored in the scoring. His stuff is electric and his confidence is off the charts, but it’s a Game 7 on the road and will be an acid test for the rookie who was rattled in Atlanta in the NL Division Series.

Brewers: From innings eater to playoff ace, that’s the journey Chacin has taken this year. And now he gets the ball for Milwaukee with the season on the line. How long will the leash be for Chacin? Probably minimal, given what’s at stake and how aggressively the Brewers have deployed their relievers this October, when less was at stake. This is a winner-take-all, so it’s possible Chacin might only pitch until the first sign of trouble.

But that’s not a reflection on how effective Chacin has been this postseason. Quite the opposite. The Brewers’ most durable starter in the regular season, he is unscored upon across 10 1/3 innings this October, the workload split between two starts. Chacin shut out the Dodgers for 5 1/3 in his last outing, Milwaukee’s 4-0 Game 3 win in Los Angeles.

How will the bullpens line up after the starter?
Dodgers: Falling behind early in Game 6, Dave Roberts managed his bullpen thinking about Game 7. He didn’t use closer Kenley Jansen, Pedro Baez or Ryan Madson, and he gets another pretty good high-leverage arm with Game 5 winner Clayton Kershaw available for relief duty.

Brewers: It won’t technically be a bullpen game, but semantics aside, it very well could end up that way. The Brewers will be even more hyper-aggressive deploying their relievers in Game 7’s do-or-die setting, and they are perfectly set up to do so after winning Game 6 handily. Their 7-2 margin ensured they didn’t have to use Josh Hader, meaning the fireman will be on three full days of rest and no restrictions. That plays completely into Craig Counsell’s game plan

Video: NLCS Gm6: Counsell on having Hader for Game 7.

Should Milwaukee grab an early lead, Counsell would likely call on Hader and ride him as far as he can. And behind Hader, the Brewers are set up well. Jeremy Jeffress is coming off a scoreless outing. Joakim Soria will be rested after not pitching in Game 6. And Corey Knebel has been dominant this postseason, Friday’s 1 2/3-innings effort providing the latest example. Knebel is likely the only member of the usual late-inning crew who might need to be used at all delicately.

“Best-case scenario for us,” Counsell said. “You’ll see [Hader on Saturday], for sure.”

Are there any relievers who are unavailable?
Dodgers: Roberts said it’s all hands on deck.

Brewers: Corbin Burnes could be limited after throwing two innings Friday, and it may be a push to ask Knebel for five outs again. But if they have to, the Brewers will. It’s win or go home.

Any injuries of note?
Dodgers: The one possibility is Pederson, who was hit by a 96-mph Knebel pitch on the right wrist in the sixth inning. He remained in and finished the game, struck out in the ninth inning and apparently did not have X-rays taken, but that doesn’t mean it won’t swell up and be sore Saturday.

Video: NLCS Gm6: Pederson stays in after getting hit on hand

Who is hot and who is not?
Dodgers: After going 0-for-5 as mostly a decoy, Freese homered and doubled against Wade Miley. Machado has done the most damage for the Dodgers this postseason, but he responded to a hostile Milwaukee crowd with an 0-for-4 and two strikeouts. L.A.’s position player with the highest average in the series is Taylor at .350. Max Muncy has 10 strikeouts in 18 at-bats.

Brewers: Cain is back to fueling the Brewers from the top of their order, going 4-for-his-last-9. Yelich doubled Friday, but it marked just his first extra-base hit of this series. Milwaukee hopes big Game 6 performances by Aguilar (3-for-5, 3 RBIs) and Moustakas (RBI double) were signs of more to come.

More than anything, Friday marked a departure from what had been a series-long struggle for the Brewers: hitting with runners in scoring position. They went 5-for-16 (.313) in those spots in Game 6, after entering play 5-for-their-last-35 in those situations.

Anything else fans might want to know?
This is the first Game 7 in Milwaukee since the 1958 World Series, when the Milwaukee Braves lost to the Yankees, 6-2. … The only previous Game 7 in Brewers history was a 6-3 loss to the Cardinals in the 1982 World Series. … The last NLCS Game 7 came in 2012, when the Giants beat the Cardinals at AT&T Park, 9-0. … The last time the Dodgers won consecutive NL pennants was 1977-78; coincidentally those are also their two most recent World Series losses prior to last year.