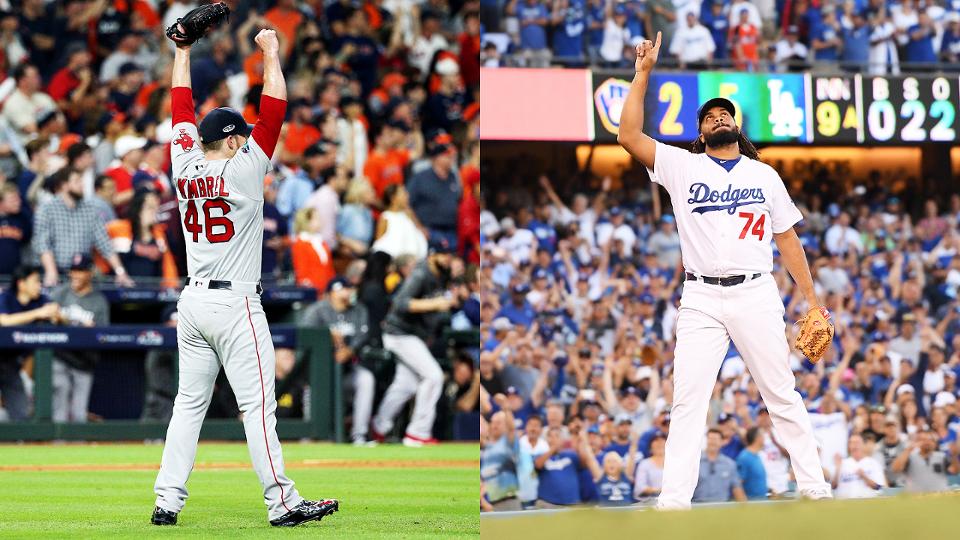 The World Series is finally set, and what a showdown: Red Sox vs. Dodgers — a 108-win Boston team that was MLB’s best team in the regular season against a Los Angeles squad returning to the World Series for a second straight season after falling just short in Game 7 a year ago.

If we’re lucky, this Fall Classic will be exactly that — a classic. But before the World Series begins on Tuesday in Boston, here are five key storylines to watch.

1. Clayton Kershaw vs. Chris Sale
Two of the best starting pitchers of their generation should be set to square off in Game 1. So how do they match up?

For Sale, the most immediate question is how he’ll bounce back from the illness that hospitalized him after his start in the American League Championship Series opener. The left-hander was outdueled by Justin Verlander in his lone appearance in the series, the only game the Red Sox lost to the Astros. Sale allowed two runs in four innings while struggling with his command, walking four and hitting a batter.

There’s also still the more general question of Sale’s health after he pitched only 17 innings over the final two months of the season due to inflammation in his left shoulder and never quite regained the elite velocity the Red Sox saw from him earlier in the summer. Still, that didn’t stop him from dominating in the AL Division Series, throwing 5 1/3 innings of two-run ball to beat the Yankees in Game 1 and then a scoreless inning in relief in the Game 4 clincher at Yankee Stadium.

Kershaw has had velocity concerns, too, as his fastball is at the lowest it’s been in his entire career. But he’s reinvented himself as one of the most breaking ball-heavy starters, and he just bounced back from a loss to the Brewers in Game 1 of the National League Championship Series to dominate in Game 5 — and close out the series in relief in the winner-take-all Game 7. Add that to his eight scoreless innings to beat the Braves in Game 2 of the NLDS, and Kershaw is still pitching like an ace.

Between Kershaw and Sale, hitters on both sides will have their hands full.

2. Betts and Machado head two deep offenses
The Red Sox have a relentless lineup — ALCS MVP Jackie Bradley Jr. has hit eighth or ninth all postseason — but their offense still flows from the one-two punch of Mookie Betts and J.D. Martinez, maybe the best combination in baseball this year. Betts won the AL batting title by hitting .346, led the league in slugging at .640 and joined the 30-30 club with 32 homers and 30 stolen bases. Martinez chased the AL Triple Crown and finished with a .330 average, 43 homers and a league-leading 130 RBIs. Martinez has also hit Kershaw particularly well — he’s 5-for-11 in his career against the Dodgers’ ace, with a pair of home runs, including one in last year’s NLDS, when Martinez was on the D-backs.

Los Angeles has a superstar, too, in Manny Machado, who hit .297 with 37 home runs and a .905 OPS in the best offensive season of his career. Add such hitters as NLCS MVP Cody Bellinger (a walk-off hit in Game 4 and the go-ahead homer in Game 7), Justin Turner (a career .310 postseason hitter), Max Muncy (35 homers in his out-of-nowhere breakout season) and the dynamic Yasiel Puig, and you get two of the deepest lineups in the game opposing each other. The Red Sox averaged 5.41 runs per game this season to lead the AL (and MLB); the Dodgers averaged 4.93 to lead the NL.

3. How do the relief corps compare?
It’d be easy to look at the two closers’ contrasting Octobers — Kenley Jansen‘s dominance for the Dodgers and Craig Kimbrel‘s roller-coaster ride for the Red Sox — and say that Jansen and L.A. have the advantage. But it’s not so simple.

Video: Cora on confidence in Kimbrel

Yes, Kimbrel has been scored upon in four of his five postseason appearances (despite getting the save in all five), with a 7.11 ERA and six walks and two hit batters in his 6 1/3 innings. That said, he’s coming off his best outing in the ALCS clincher — a scoreless inning with two strikeouts to close out the defending champion Astros. And yes, Jansen has yet to allow a run in these playoffs, with 6 2/3 scoreless innings, just two hits allowed and 10 strikeouts. But he’s not untouchable, as Houston proved in last year’s World Series, when it handed him a blown save in Game 2 and a walk-off loss in Game 5.

Most important, though, is that given bullpens’ outsize importance in October, the matchup goes far beyond the two closers. Such pitchers as Ryan Brasier, Matt Barnes, Joe Kelly and Eduardo Rodriguez have all played key roles for the Red Sox, as have Ryan Madson, Pedro Baez, Alex Wood, Julio Urias and Kenta Maeda for the Dodgers. Both teams have also demonstrated a willingness to use their starting pitchers out of the bullpen — Sale and Rick Porcello have both pitched in relief for Boston this postseason, and Kershaw and Rich Hill have done so for Los Angeles. In the World Series, it’ll likely be “all hands on deck” again.

Something else to monitor: Red Sox relievers’ walk rate has spiked to 15.2 percent this postseason, from 9.8 percent in the regular season (which was MLB’s ninth-highest) — thanks to Kimbrel’s shakiness, plus Barnes (6 1/3 innings, six walks), Heath Hembree (3 1/3 innings, four walks) and Brasier (7 innings, four walks). The Dodgers are well equipped to take advantage of strike-zone issues, having led the Majors in walk rate this season (10.2 percent). L.A. also swung at the lowest percentage of all opponent pitches (43.5 percent) and had the lowest chase rate out of the zone (23.8 percent). So don’t expect the Dodgers to help out opponents struggling with control.

4. How will the Red Sox manage their lineup in a National League park?
Martinez will play every game for the Red Sox. He’s too good a hitter not to, and manager Alex Cora confirmed as much on Saturday. That will create some interesting questions for Games 3-5 at Dodger Stadium, where Boston will have no designated hitter. If Martinez plays right field, who will be the odd man out of the lineup?

Against a left-handed starter, Betts would likely move to center field, and either Bradley or Andrew Benintendi would sit. Bradley seems the likelier option to sit. But against a righty — and Walker Buehler seems likely to start one of the games in L.A. — when the Red Sox might want both left-handed bats in the lineup? Well, maybe they could go unconventional … and play Betts at second base, where he used to play in the Minors and has filled in in emergencies in the Majors. Cora left the door open, but Boston would have to weigh a lot of factors.

Video: Cora on defensive alignment, Betts at second base

“I don’t know, man. He already played second during the regular season, so there’s always a chance, I guess,” Cora said on Saturday, adding, “[Contact at second base], turning double plays in a big moment, him not playing second base in a while, him being the best right fielder in the league. All that stuff comes into consideration.”

Putting Martinez in the outfield at the expense of Bradley or Betts would temper what could otherwise be a sizeable Boston advantage in outfield defense. Betts and Bradley have both been worth 11 Outs Above Average defensively this season (that’s Statcast™‘s range-based metric for outfield defense), tying them for 10th-best among all MLB outfielders. Martinez has a negative-7 OAA mark.

5. Can the Dodgers’ lefty arms give them an edge over the Red Sox bats?
The Red Sox handled J.A. Happ, CC Sabathia and Dallas Keuchel well this postseason. But in a much larger sample during the regular season, Boston ranked first in the Majors in OPS against right-handed pitchers (.817), compared with 18th against southpaws (.719). That gap was less severe when looking only at starting pitchers (.802 vs. .759), but still significant. Among the Red Sox’s hitters, only Betts, Martinez, Xander Bogaerts and Steve Pearce had at least a .750 OPS off lefties.

The Dodgers likely would put three southpaws in their four-man rotation: Kershaw, Hill and Hyun-Jin Ryu. Los Angeles also can choose from Wood, Urias, Caleb Ferguson and Scott Alexander to stock its bullpen.

David Adler is a reporter for MLB.com based in New York. Follow him on Twitter at @_dadler.