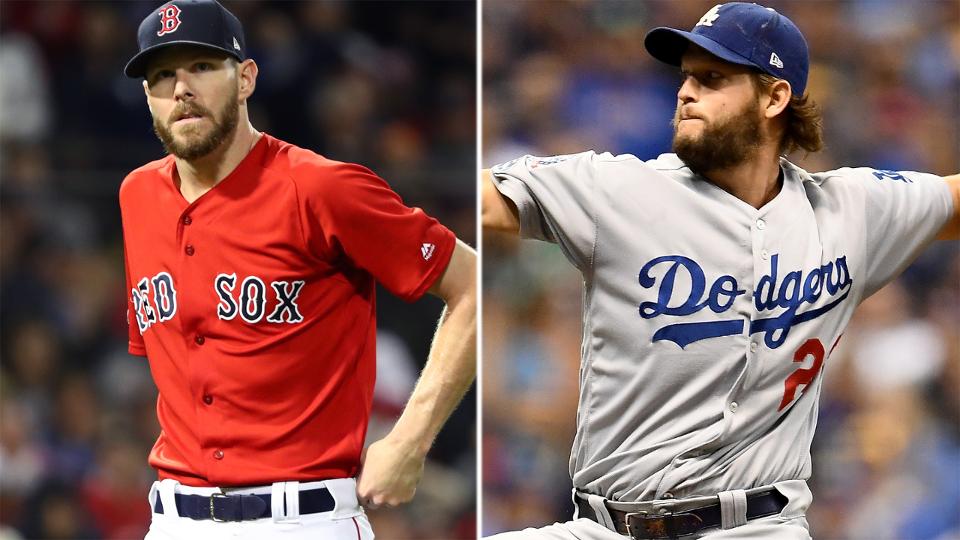 Two of baseball’s most historic teams — the Red Sox and Dodgers — are set to meet in what should be a thrilling World Series. The fun starts on Tuesday night at Fenway Park when arguably the two most dominant lefties in the Majors face off. Chris Sale will start for the Red Sox, and the Dodgers are waiting to decide whether Clayton Kershaw will be ready to take the ball after pitching the ninth inning of the National League Championship Series clincher on Saturday. Fellow lefty Rich Hill is likely to start if the L.A. ace needs more time.


Managers Alex Cora and Dave Roberts are good friends and former teammates. In fact, Cora and Roberts both played for the Red Sox and Dodgers. Look for Roberts to get a nice ovation when he is introduced at Fenway prior to Game 1. His stolen base in Game 4 of the 2004 American League Championship Series against the Yankees will never be forgotten.

Here is a primer to get you ready for a Fall Classic that features two star-studded rosters and solid role players on both sides.

What might the starting lineups look like?
Dodgers: Roberts used a different leadoff hitter in each of the last four games in the National League Championship Series. Good luck guessing his lineup, but here’s one possibility:

Red Sox: The most balanced lineup in MLB this season now takes its act to the World Series. With Kershaw expected to pitch Game 1, Cora will likely stack the deck with right-handed hitters, as he’s done against other lefties in this postseason. This means that Steve Pearce will start at first base instead of Mitch Moreland, and Eduardo Nunez at third base instead of Rafael Devers, who belted a three-run homer in the clinching Game 5 of the ALCS against the Astros. Though Cora has more or less turned the catching reins over to Christian Vazquez of late, the slumping Sandy Leon has caught Sale all season, and that could again be the case in the World Series.

Who are the starting pitchers?
Dodgers: The Dodgers on Sunday were not quite ready to commit the start to Kershaw, who made the final 15 pitches on Saturday night in Milwaukee. Roberts said if Kershaw doesn’t start the opener against the Red Sox, the nod will go to Hill and Kershaw will start Game 2 on Wednesday night.

Video: Debating which team has the pitching advantage in WS

Red Sox: Red Sox ace Sale (12-4, 2.11) has been the best lefty starter in the AL over the past several years, so it’s only fitting he faces the guy who has that same distinction in the NL. Sale will be fired up for his first World Series game. He did have issues down the stretch, pitching just 17 innings from July 28 through the end of the regular season due to left shoulder inflammation. After Sale had an impressive showing against the Yankees in Game 1 of the AL Division Series, his velocity and command were lacking in his no-decision in Game 1 in the next round against the Astros. Sale had a stomach virus right after that start against Houston and will be on nine days’ rest when the World Series starts. Extra rest has generally been a good thing for Sale this season.

Video: ALCS Gm1: Sale strikes out 5 over 4 innings in Game 1

How will the bullpens line up after the starter?
Dodgers: The Dodgers’ bullpen had a 1.45 ERA in the NLCS. Not only is Kenley Jansen back, Pedro Baez remains unexpectedly dominant and Ryan Madson is the calm in a storm. Kenta Maeda hasn’t been the impact setup man as expected, but with Dylan Floro, Caleb Ferguson and Alex Wood, Los Angeles’ bullpen is deep and versatile. Of course, the Dodgers thought they had a superb relief corps going into last year’s World Series, when Jansen and Brandon Morrow appeared to wilt under a heavy workload.

Red Sox: Boston’s bullpen, much-maligned despite finishing fourth in the AL in ERA this season, had a strong showing in the ALCS. Pitchers have found their roles, and Cora has gained confidence in them. Matt Barnes and Ryan Brasier are the two relievers Cora trusts the most in the setup role. Closer Craig Kimbrel had struggled in this postseason until the Game 5 clincher against Houston, when he fixed an issue of tipping pitches that former Dodgers closer Eric Gagne pointed out to him, and he was dominant in closing out the Astros. The addition of Steven Wright, who missed the first two rounds of the postseason due to a right knee injury, could be a big boost for Cora and lessen the need for him to use his starters in relief.

• Wright making case to be on Sox’s WS roster

Are there any relievers who are unavailable?
Dodgers: No.

Red Sox: Everyone is available, assuming Wright is placed on the roster.

Any injuries of note?
Dodgers: None known. Joc Pederson started Game 7 after being hit by a 96-mph fastball on the right wrist in Game 6 but had only one at-bat, a groundout, before he was replaced after a pitcher change.

Video: NLCS Gm6: Pederson stays in after getting hit on hand

Red Sox: Nunez has been bothered by right ankle issues since the regular-season finale, so the rest between rounds will likely do him some good. Moreland injured his right hamstring in Game 2 of the ALDS and has only started once since then. He still isn’t running at full speed but will probably start against right-handed starters in the World Series.

Who is hot and who is not?
Dodgers: Taylor hit a quiet .364 against the Brewers and Puig hit .333, including his crucial three-run home run in Game 7. But even in the clincher, the Dodgers went 1-for-10 with runners in scoring position, so there are still chinks in the offensive armor, but the one hit was Puig’s blast. Max Muncy and Enrique Hernandez really struggled in the NLCS, Muncy with 13 strikeouts in 22 at-bats and Hernandez going 1-for-14 with eight strikeouts. The bullpen has been nearly untouchable, but the starting rotation unpredictable.

Red Sox: Considering Bradley hit .200 in the ALCS, it’s hard to classify him as hot. But he has made his hits count. The three he had against the Astros added up to nine RBIs and led to the center fielder earning ALCS Most Valuable Player Award honors. Betts has shown flashes of brilliance in the postseason, but he hasn’t gotten hot yet. This probably means he will. In 39 postseason at-bats, Betts is hitting .205 with no homers and three RBIs. The Dodgers have a rotation that is lefty-dominant, so it will be interesting to see how Cora deploys left-handed hitters Devers and Moreland, who have both swung the bat well when they’ve played this postseason. Leon continues to be close to an automatic out. Since Aug. 25, the switch-hitter has two hits in his last 52 at-bats. He has a .149 OPS over that stretch.

Anything else fans might want to know?
There’s a 50 percent chance of showers in Boston on Tuesday night with forecasted temperatures in the mid-40s. … This is the first time the Dodgers have played at Fenway Park since 2010. … The last time the teams met was 2016, when Los Angeles took two out of three. … Kershaw has never faced the Red Sox. … Sale doesn’t have much more history with the Dodgers. He last faced them on June 15, 2012, taking a no-decision at Dodger Stadium. Sale’s only other appearance against them was in relief in 2011. … These two iconic franchises have met just once in the World Series, in 1916, when the Dodgers were still in Brooklyn and known then as the Robins. The Red Sox won in five games in the second of three World Series titles won in four years from 1915-1918 prior to a drought that lasted until Boston again won the World Series in 2004.