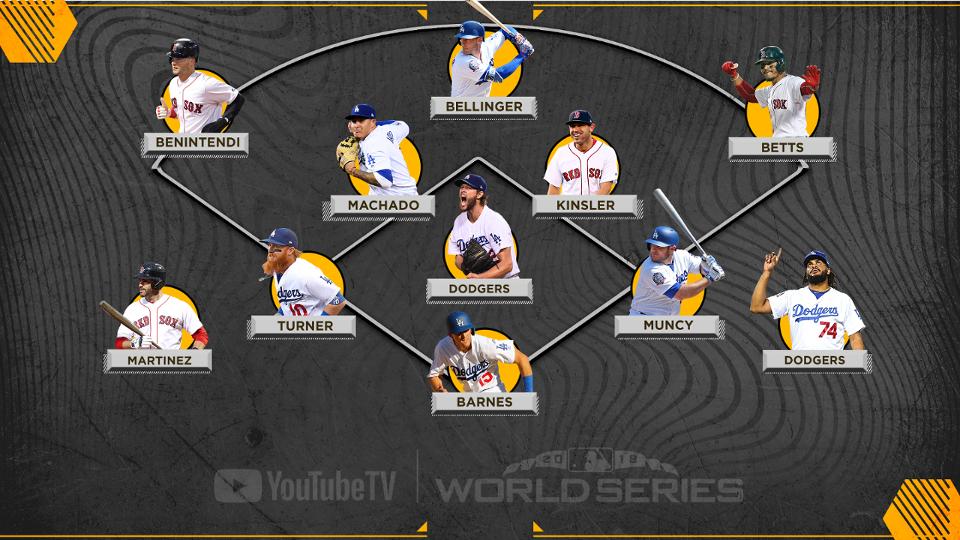 The goal here is to do a position-by-position analysis of this World Series, but that will naturally be difficult to do with so many wonderful players involved. This Fall Classic matchup has spoiled us with the likes of Dick Hoblitzell, Zack Wheat, Hi Myers, Jeff Pfeffer, Wheezer Dell, Pinch Thomas, Dutch Leonard and, of course, 21-year-old pitching sensation Babe Ruth. It’s a…

Wait, I appear to have mistakenly consulted the rosters from the last time the Red Sox and “Dodgers” (then known as the Brooklyn Robins) encountered each other on baseball’s grandest stage, way back in 1916.

While there won’t be any Rube Marquard sightings when the present-day Red Sox and Dodgers begin their best-of-seven series on Tuesday night at Fenway Park, there will be plenty of star power assembled for these two iconic franchises.

So let’s break it down to see who has the edge in a rematch 102 years in the making.

Yasmani Grandal was so passed-ball porous in the National League Championship Series that he lost playing time to a guy (Austin Barnes) who is 2-for-18 in the postseason. That said, Grandal was baseball’s second-most productive catcher at the plate in 2018, while Boston’s catching tandem of Christian Vazquez and Sandy Leon hit a combined .192 during the regular season. (Batting average might not tell us much, but sometimes it tells us enough.) If it’s still Barnes behind the plate for the Dodgers, he, like Vazquez and Leon, is at least an asset defensively.

Right hamstring tightness limited Mitch Moreland to pinch-hitting duties until Game 5 of the American League Championship Series, but he went 3-for-6 with a double in the series. Meanwhile, lefty-pitching masher Steve Pearce has had some big hits against lefties and righties alike this postseason and could be a weapon against Los Angeles’ three left-handed starters.

But while out-of-nowhere Dodgers star Max Muncy hasn’t replicated his regular season .973 OPS in the postseason, he has hit two big postseason homers. Los Angeles also has World Series hero David Freese (3-for-10 with a homer and double this October) as an option against Boston’s two southpaw starters.

This is where we’ll advise the uninitiated that the Dodgers make these position-by-position exercises painful, because manager Dave Roberts’ Swiss Army Knife-lineup style involves a lot of moving parts. So you’ll see some combination of Muncy, Chris Taylor, Enrique Hernandez and Brian Dozier here. That’s added up to a .194/.341/.333 slash from Los Angeles second basemen this postseason.

The Red Sox have moving parts at this particular position, too, with Ian Kinsler and Brock Holt sharing time. Holt had a night for the ages with his Game 3 cycle in the AL Division Series, but on measure, Boston’s postseason production hasn’t been much better than the Dodgers’ at second base. The X-factor is likely AL Most Valuable Player Award winner Mookie Betts, who could see time at second base in one to three games when the Series shifts to NL rules at Dodger Stadium (to keep J.D. Martinez‘s bat in the lineup). That possibility is enough to swing it.

Video: Cora on defensive alignment, Betts at second base

Manny Machado has generated headlines this postseason for not hustling to first, kicking at an opponents’ leg, sliding controversially into second, gesticulating rudely toward the crowd at Miller Park and being called a “dirty player.” Yikes.

Rafael Devers has made the most of limited opportunities on this postseason stage, with a 7-for-20 showing and a big dinger in Game 5 of the ALCS. It remains to be seen if Red Sox manager Alex Cora will ride the hot hand at the hot corner after Eduardo Nunez nursed a twisted right ankle against the Astros.

For the Dodgers, it’s simpler: Justin Turner, in terms of career postseason on-base percentage (.425), is the closest thing this year’s Fall Classic has to Babe Ruth (and not the 1916 model). He’s actually had a quieter October outside the game-winning homer in Game 2 of the NLCS, but he’s always a threat.

Matt Kemp‘s renaissance has given way to a Taylor/Joc Pederson postseason platoon for the Dodgers. In addition to making one of the most clutch catches of October, Taylor also has a 1.143 OPS in 18 plate appearances as a left fielder this postseason.

But Andrew Benintendi had an awfully clutch catch of his own, on the heels of a breakout regular season (.290/.366/.465 slash with 16 homers, 87 RBIs and 41 doubles). Taylor is by far the hottest hitter either team employs in left, but his impact is also spread across two other positions (second and center). So we’ll side with Benintendi here.

It’s the ALCS MVP vs. the NLCS MVP. And both of them hit exactly .200 in the round! Talk about making it count.

For the Dodgers, you’ll see a little of Taylor and Hernandez in this spot, but by and large, it will be Cody Bellinger, who came through with a couple of huge late-inning hits and a sensational catch in the NLCS. Meanwhile, Jackie Bradley Jr.‘s 9-RBI showing on the LCS stage (on three hits) was impressively efficient, too.

Anyway, big samples matter more than small samples, and Bellinger (120 OPS+ to Bradley’s 92 mark, with twice as many Wins Above Replacement) is the more productive player.

The erratic engine that is Yasiel Puig is running awfully hot right now (.321/.406/.536 slash in 32 postseason plate appearances), and opponents have done a terrific job keeping the monster that is Betts (.205/.295/.282) in check. So maybe this is closer than it would have appeared a few weeks ago.

But the Red Sox are going to start two guys (Betts and Martinez) who will likely finish in the top five of the MVP Award voting in right field during this Series, and, well, that’s good enough for us.

The Dodgers split the DH duties between Pederson and Turner last year against the Astros, and their overwhelming array of talent, which allows for so much mixing and matching, is a major asset.

But the Red Sox have a lot of versatility and platoon prowess, too, with Holt a particularly big X-factor for them. And it should go without saying that the presence of Martinez looms large. He’s hitting .313 with a .946 OPS this October.

But the postseason presents plenty of nuance, beginning with the fact that we had to even make that “as starters” notation, with Kershaw and Hill both pitching out of the bullpen for the Dodgers in the NLCS, as well as the Red Sox either using or warming all of their starters as relievers at one point or another. Does Price‘s minor mechanical tweak that unlocked his Game 5 brilliance have staying power? Do Buehler’s innings as a rookie catch up to him? Which postseason Kershaw do we get? What are the lingering effects of Sale’s illness and absence?

• Red Sox to start Sale in Game 1 of World Series

Lots of interesting questions in two very good rotations. In the end, for the sake of our sanity, we’ll just stick with the quick and dirty math.

The Dodgers had a reputation this season for being too dependent on Kenley Jansen for their own good, and Jansen had a rollercoaster regular season. But for all the concern caused by his irregular heartbeat and inflated homer rate, he has been spotless this October, with 6 2/3 scoreless innings. And the Dodgers’ bullpen as a whole has had a sparkling 1.30 ERA in 41 2/3 postseason innings after posting baseball’s second-best relief ERA in September.

As evidenced by the fact that Porcello, Price and Sale all pitched in relief in previous rounds (and Price warmed up late in Game 4 of the ALCS), the Red Sox are in more of a scramble for late-inning outs. And four of Craig Kimbrel‘s five outings this October have been on the shaky side, though there is some thought that he’s addressed a pitch-tipping issue. That doesn’t mean the Red Sox can’t get the job done. They’ve made it this far, haven’t they? But Los Angeles’ bullpen appears to be in a better spot right now.

I’ve given the edge to the Dodgers in seven of 11 spots. What does that mean, in real terms? Absolutely nothing, because, as we know well, baseball games and series are decided not on individual positional battles, but by the cohesion of rosters, with plenty of surprise performances sprinkled in.

The Red Sox are, understandably, considered the early favorites, because they not only survived, but thrived in an AL battle that was perceived to be a showdown of superpowers.

That said, I still like the Dodgers here. They just played an NLCS in which they looked awful in three games but won anyway. That’s the story of their season, in a nutshell. They have the sheer depth of talent and the versatility to overcome everything (even themselves), and I think they’ll avenge last year’s Series loss.

Anthony Castrovince has been a reporter for MLB.com since 2004. Read his columns, listen to his podcast and follow him on Twitter at @Castrovince.