WASHINGTON – Moving beyond a rancorous confirmation battle that divided the country, Brett Kavanaugh got down to business as a U.S. Supreme Court justice on Tuesday and took an active role in arguments alongside his eight new colleagues on his first day on the job.

Kavanaugh asked several questions during two hours of lively oral arguments involving a federal sentencing law for repeat offenders, three days after being confirmed by the Republican-led Senate despite being accused of sexual assault. Appointed by President Donald Trump, Kavanaugh’s confirmation cemented a conservative majority on the court that could last for years.

The tone inside the courtroom was collegial, in contrast to the venom of Kavanaugh’s confirmation fight.

He took his seat at the right end of the mahogany bench in the ornate courtroom – the location assigned to the court’s junior-most member – and wore traditional black robes like the other justices. Retired Justice Anthony Kennedy, the 82-year-old jurist who Kavanaugh replaced, was in the courtroom, as were members of the new justice’s family.

With police standing by, a small group of protesters gathered outside the courthouse, holding signs saying “Shame” and “He sits on a throne of lies,” while chanting, “This isn’t over, we’re still here.” With security tight in the courtroom, there were no disruptions by protesters during the arguments, as there had been during Kavanaugh’s confirmation hearings.

Before the arguments, Chief Justice John Roberts welcomed Kavanaugh, 53, to a court that now has five conservative members and four liberals.

“We wish you a long and happy career in our common calling,” Roberts told Kavanaugh, who could serve for decades in the lifetime job.

The bitterly divided U.S. Senate voted 50-48 on Saturday to confirm Kavanaugh, with just one Democrat supporting him. Kavanaugh’s confirmation gave the Republican president a political victory ahead of crucial Nov. 6 congressional elections.

Kavanaugh posed questions to lawyers in both cases before the court, his first one coming about 20 minutes into the arguments.

At one point, Kavanaugh could be seen having a lighthearted exchange with liberal Justice Elena Kagan, seated next to him. At another point, liberal Justice Sonia Sotomayor appeared to pinch Gorsuch, sitting next to her, to playfully illustrate her point about what constitutes a violent act. Gorsuch responded with a faux grimace of pain.

Tuesday’s cases involved the 1984 Armed Career Criminal Act, a “three-strikes-and-you’re-out” criminal sentencing law that boosts prison sentences for people who are convicted of crimes involving guns if they have previously been convicted of certain other crimes.

The cases challenge the types of crimes that qualify as violent felonies under that law and can lead to 15-year mandatory minimum sentences. The cases involved a Florida robbery and burglaries in Tennessee and Arkansas.

Based on Tuesday’s arguments, defendants could win in both cases, with liberal justices likely to be joined by some conservatives in the majority. Kavanaugh appeared less sympathetic to the defendants than Gorsuch.

Kavanaugh moved to the Supreme Court after spending 12 years as a judge on the influential U.S. Court of Appeals in Washington, building a conservative judicial record.

Before hearing arguments on Tuesday, the justices turned aside appeals of a 2017 ruling authored by Kavanaugh on the lower court that struck down a 2015 environmental rule imposed under Democratic former President Barack Obama regulating a potent greenhouse gas linked to climate change.

The justices privately made the decision not to hear the appeals by an environmental group and companies before Kavanaugh’s confirmation and announced the action on Tuesday.

Kavanaugh is expected to push the court further to the right as he is replacing Kennedy, a conservative who sometimes voted with the liberal justices on key social issues including in cases involving abortion and gay rights.

His nomination had appeared safe until Christine Blasey Ford, a university professor in California, last month went public with allegations that Kavanaugh sexually assaulted her in 1982 when they were high school students in Maryland. Two other women also accused Kavanaugh of sexual misconduct dating to the 1980s.

Kavanaugh denied the allegations and during a Senate hearing on Sept. 27 accused Democrats of an “orchestrated political hit.”

He later wrote in a newspaper opinion piece that he regretted some of his comments. But critics said Kavanaugh’s demeanor before the Senate Judiciary Committee raised questions about his temperament and potential political bias in deciding cases.

At a White House ceremony on Monday night, Kavanaugh said he was starting his new job with “no bitterness,” seeking to be “a force for stability and unity.”

Trump on Twitter on Tuesday said he was “very proud” of Kavanaugh and his family, and disparaged the anti-Kavanaugh protesters. 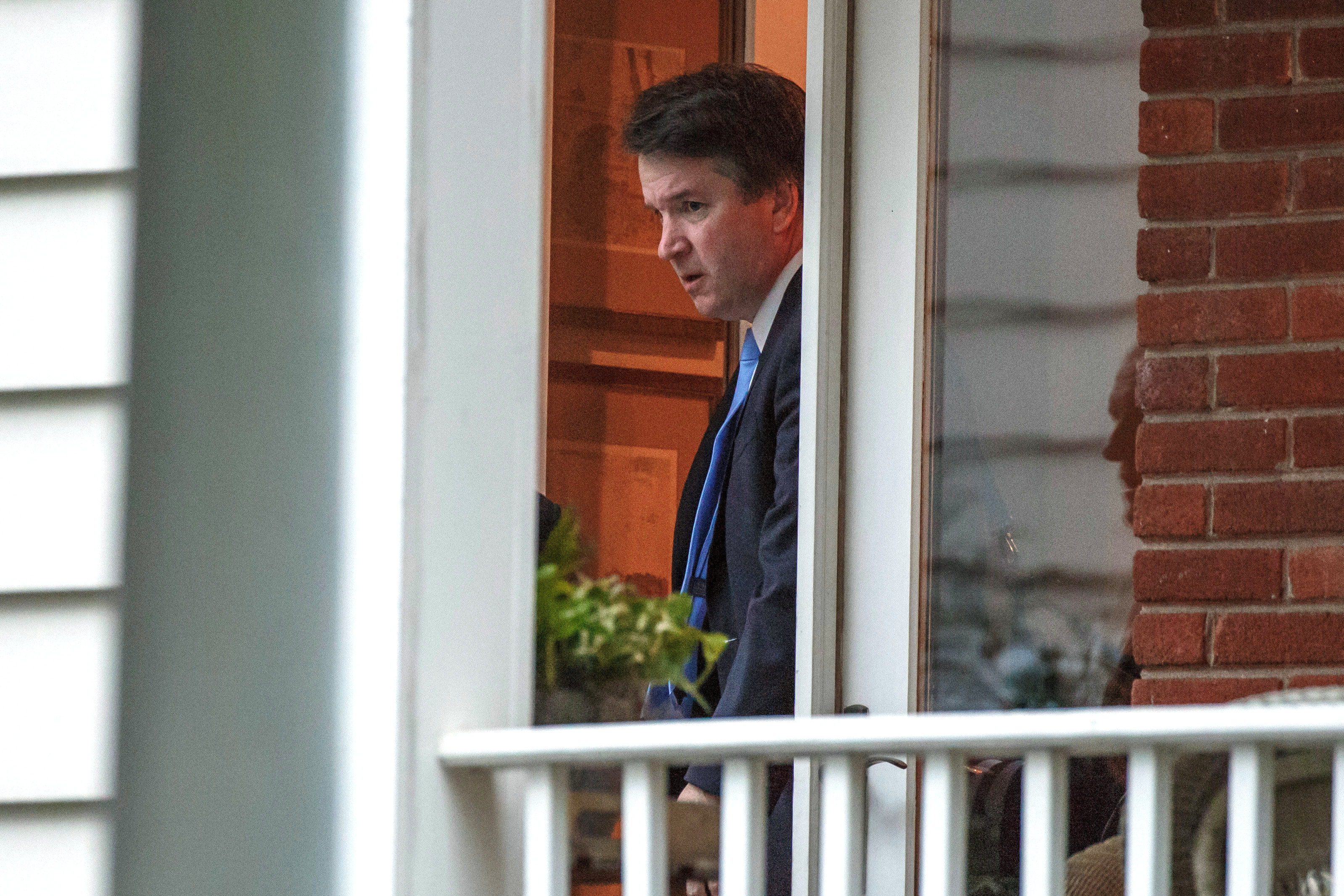