DAKAR – When Central African Republic (CAR) pleaded for help last year to fight marauding militias, former colonial ruler France offered guns it had seized off Somalia. But Russia objected and donated its own weapons instead.

By early February, Russia had sent nine planes with weapons along with dozens of contractors to train local soldiers and secure mining projects, marking the start of its highest-profile military foray in sub-Saharan Africa for decades.

Muscling in on a country dominated by France for years served as a statement of intent about Moscow’s renewed push for global prestige and influence, and is part of a wider campaign shaking up long-standing power dynamics on the continent.

Since Western nations sanctioned Russia for annexing Crimea in 2014, Moscow has signed 19 military cooperation deals in sub-Saharan Africa, including with Ethiopia, Nigeria and Zimbabwe, according to its foreign and defense ministries and state media.

The continent’s 54 member states at the United Nations three of which sit on the Security Council at any given time form the organization’s largest voting bloc and one of its most coherent, making them attractive allies for Russia.

“The West is not very much loved by many countries. And many (see) Russia as the country that will oppose the West,” said Dmitri Bondarenko, an anthropologist and historian at Russia’s Institute for African Studies.

Russia’s moves come at a time when the defense ministry’s influence over Kremlin foreign policy is growing against a backdrop of heightened tension with the West.

When CAR made its plea in 2017, there was recognition that a spike in ethnic fighting could turn into a far larger conflict and that its security forces were too weak to tackle myriad armed groups.

CAR has been under a U.N. arms embargo since 2013 so weapons shipments must be approved by the U.N. Security Council’s CAR sanctions committee, made up of the Council’s 15 members, including France and Russia. It operates by consensus.

France first offered to help CAR buy old weapons but the proposal was too expensive. France then offered 1,400 AK47 assault rifles it had seized off Somalia in 2016, according to a Security Council memo and four diplomats.

Russia objected on the grounds that weapons seized for breaching the U.N. arms embargo on Somalia could not be recycled for use in another country under embargo, two diplomats said.

But mindful of the need for a quick solution, the sanctions committee approved Moscow’s donation of AK47s, sniper rifles, machineguns and grenade launchers in December, according to committee documents and diplomats.

“We presented our problem and Russia offered to help us, subject to Security Council approval,” said Albert Yaloke Mokpeme, CAR’s presidential spokesman. “If peace is restored tomorrow in CAR, I think everyone will be happy.”

Russia’s foreign ministry did not respond to requests for comment about committee proceedings.

France’s foreign ministry said Russia must strictly respect the terms of its arms embargo exemption to keep the weapons out of the wrong hands.

During the Cold War, the Soviet Union forged close military and diplomatic ties with many African countries. It was involved in proxy wars in states such as Angola, Ethiopia and Mozambique and helped independence movements fight Western colonial powers.

Russia is now trying to revive some of the relationships that lapsed after the Soviet Union’s collapse. It joins a number of countries such as Turkey and the United Arab Emirates looking to set up bases in Africa, mediate in diplomatic stand-offs and strike business deals.

China has long had a major economic presence in Africa but it has shied away from any military involvement. It did go a step further last year, however, opening its first military base outside China in Djibouti.

Near the world’s busiest shipping lanes, Djibouti is also home to a large French base, the only U.S. base in Africa, an Italian camp and Japan’s only overseas base.

Djibouti blocked Russian attempts to set up a base, however, saying it wanted to avoid becoming the terrain for a proxy war. Moscow is now planning to build a logistics center at a port in neighboring Eritrea.

While France has a military bases outside Djibouti in former colonies Gabon, Ivory Coast and Senegal and its soldiers also operate in Chad, Mali and Niger, analysts say Washington’s influence is on the wane.

Its trade with the continent has halved in the past decade, though much of that is due to U.S. shale replacing oil imports from Africa. Diplomatic posts have gone unfilled and a task force based in CAR tracking warlord Joseph Kony left last year.

“Our actions on the diplomatic and military side have sent a huge signal to our partners that we’re not interested in Africa,” said Donald Bolduc, who commanded U.S. special forces across the continent until last year.

U.S. Assistant Secretary of State for African Affairs Tibor Nagy said Washington’s commitment to Africa was unwavering but, “there is space for other countries to play a positive role in the region”.

As part of Russia’s renewed push, Foreign Minister Sergei Lavrov went on a five-nation tour of Africa in March, attended a summit in South Africa in June and visited Rwanda, chair of the African Union, this year.

Russia has also struck military cooperation deals with many African countries since 2015, though some have yet to come into force. The agreements typically involve providing weapons and training in areas such as counter-terrorism and piracy.

Analysts caution that the deals often appear more symbolic than transformative and say it’s not clear if Russia has the resources, or desire, to continue expanding its presence.

But as in the Cold War, military deals can come alongside economic links, such as mining and energy agreements. Ethiopia signed its deal in April, a month after Lavrov visited to discuss nuclear energy, agriculture and transportation projects.

Russian firms have signed mineral deals in Sudan, which cooperates with Moscow in defense technology, and Russia is looking at diamond and platinum projects in Zimbabwe as well as energy projects in Chad.

Over the past decade, Russian trade with sub-Saharan Africa has increased fast, albeit from a low base. From 2010-2017, total trade rose to $4.2 billion a year from $1.6 billion, according to the Center for Strategic & International Studies https://www.csis.org.

During the same period, China’s total trade with sub-Saharan Africa nearly doubled to $165 billion while U.S. trade more than halved to $37 billion.

Since arriving in CAR, the Russians’ remit has expanded beyond military advice and into various economic and diplomatic activities, a Western diplomat and security source said, fuelling the beginnings of a Western backlash.

In August, France, the United Kingdom and the United States blocked a Russian request to send more weapons. The U.S. mission to the United Nations said in a note to the sanctions committee that it was awaiting, “confirmation that measures had been taken to ensure the secure management of the previous donation”.

Estimates of the number of Russians in CAR vary widely, from 250 to 1,000. Touadera’s spokesman declined to provide details, nor say what activities the Russians were engaged in.

Yevgeny Shabayev, head of a chapter of a paramilitary Cossack organization who has ties to Russian security contractors, said there could be 1,000 in CAR and 5,000 to 10,000 across Africa, including in Sudan, South Sudan and Libya.

One Russian private military contractor, the Wagner group, was thrust into the spotlight in July when three Russian journalists were killed in CAR while investigating its alleged presence there.

Reuters has been unable to confirm whether Wagner contractors are in CAR. People with ties to the group have told Reuters it has carried out clandestine combat missions on the Kremlin’s behalf in Ukraine and Syria.

Russian authorities deny Wagner contractors carry out their orders. They have denied any role in the journalists’ deaths.

Russia has also stepped into negotiations with militias in CAR, adding to Western misgivings about its presence.

According to a U.N. panel of experts, Touadera’s Russian adviser has met militia leaders several times to discuss disarmament and the distribution of natural resources revenue.

Russia said in August after brokering talks between armed groups that Touadera had expressed gratitude for its involvement and that it intended to continue its mediation.

“There is a real division between that guy and the rest of the presidential advisers,” the security source said. “When you ask, ‘Can we see your colleague?’ they say, ‘Who, our colleague? We don’t know him’.”

(Additional reporting by Michelle Nichols at the United Nations, Marie Tsvetkova and Margarita Popova in Moscow and Maggie Fick in Nairobi; editing by David Clarke) 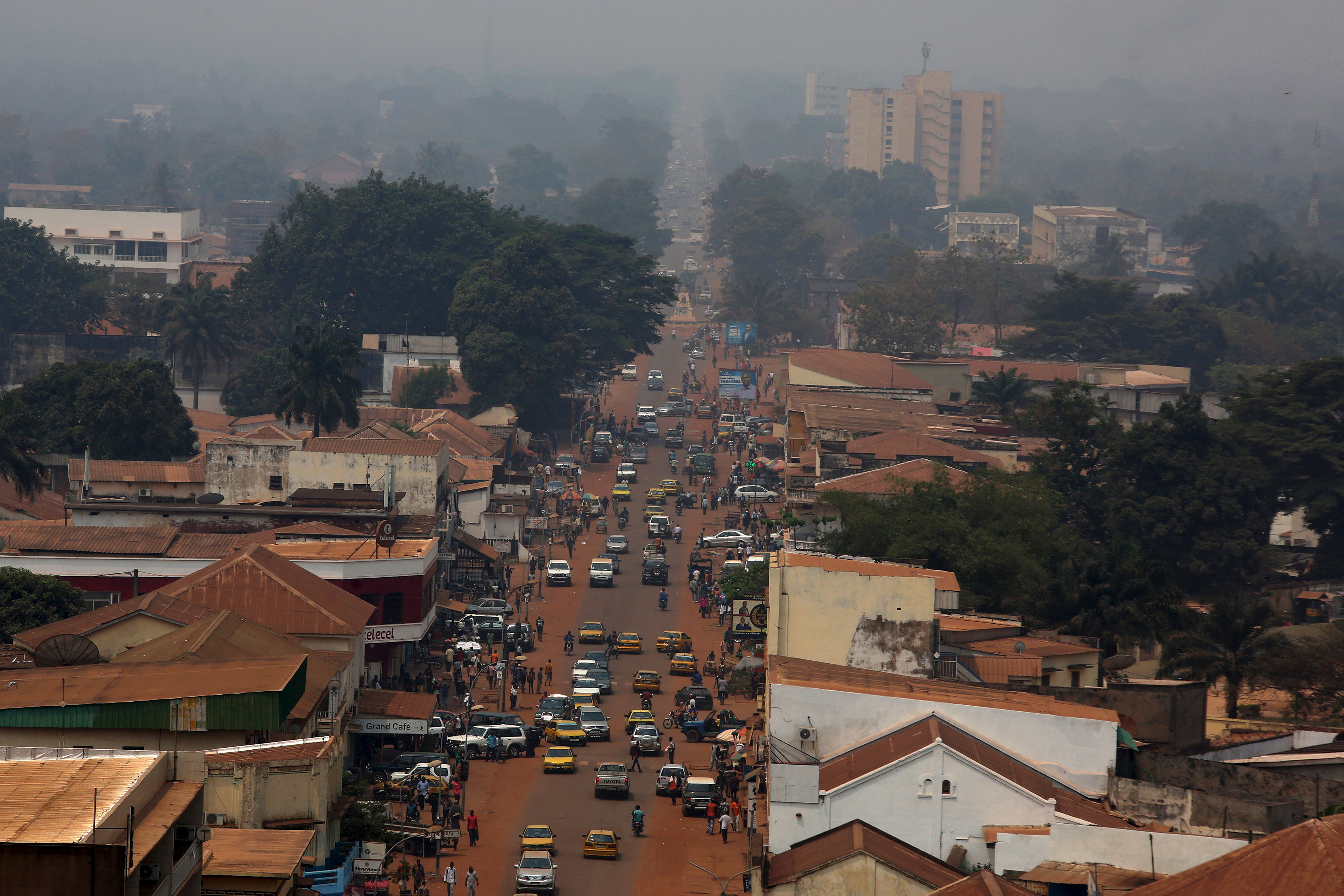