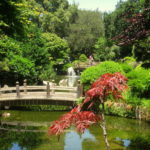 The city’s central jewel with a rose garden, mini-train, open space for events and tea garden. The city purchased the Kohl Mansion property in 1922 and transformed the 16.3-acre property into the City’s signature downtown park, simply named, Central Park. Central Park is home to many signature community events such as the Central Park Music Series, 4th of July in the Park, Extravaganza, and more. Central Park encompasses Fitzgerald Baseball Field, an open lawn area, picnic areas, a playground, tennis courts and in the winter an outdoor ice skating rink is set up in the ball field. 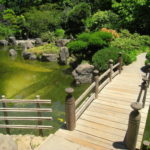 Bordered by El Camino Real, Ninth, Laurel and Fifth avenues, was once the estate home of Charles B. Polhemus, director of the San Francisco and San Jose Railroad and founder of downtown San Mateo. Kohl Mansion, was situated near the corner of Fifth and Laurel and housed the first campus of San Mateo Junior College in 1923. Now Leona, a 13-foot-tall bronze giraffe given to the city by Burlingame artist Albert Guibara, guards the park’s Fifth Street entrance. The bronze dog at the opposite end of the park greets visitors coming from Ninth Street. The dog is a favorite with the kids who love to sit on the back of the statue. The 900-foot fence that encloses the grounds, the pump house that brings water throughout the park and several historic trees are the only physical remnants in the park of Kohl’s legacy.

Self-Help for the Elderly San Mateo Center (SHE) was created to provide activities, senior service information and provides Chinese lunches to local seniors from 12:10pm to 1:00pm on weekdays. The center is located next to the Japanese Tea Garden and is open weekdays, from 9am to 4pm. To learn more about the non-profit visit their website.

San Mateo Central Park’s Japanese Tea Garden was designed by landscape architect, Nagao Sakurai of the Imperial Palace of Tokyo, and features a chashitsu/tea house, koi pond and bamboo grove. The azumaya, is a gazebo where you may spot a couple holding hands or enjoy the shinden shrine, given to San Mateo by sister city Toyonaka; and the gentle waterfall that trickles near a stone pagoda. 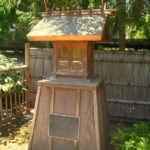 The Japanese Garden is beautiful throughout the year, and in the late Winter and early Spring the cherry blossoms are in bloom.

No dogs are allowed in the Japanese Garden but it is available for weddings.

A rose garden was one of the visions of the founder of the San Mateo Arboretum Society in1975 by Marion S. Panaretos. Several years after the planting of the original rose garden, the gazebo was added and is now used as a beautiful wedding location. The gazebo forms the center of the rose garden with over 100 bushes and a brass plaque in the brick floor of the gazebo notes the garden is named to honor of Marion.

The Mini Train in Central Park is a favorite for many. Since 1948 the Bianchi Railroad Co. operates the train, weather permitting, for children year-round (see schedule below) The charming orange-and-red mini-train loops around under the trees near the park’s El Camino Real entrance. Adults may ride if they are able to sit in the very narrow cars.

Fitzgerald Baseball Field is scheduled for softball games, the open lawn area is used for soccer, and the tennis courts are scheduled by age from Tennis for Toddlers to Juniors of various skill levels up to age 16 and Adults. Various workout groups including martial arts may offer classes in Central Park through the recreation department as well as pottery classes.