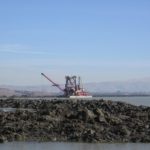 To compensate for marshland habitat that was overrun in the past, several wildlife preserves in the south bay seek to protect migratory birds, threatened and endangered species, and provide opportunities for wildlife-oriented recreation and nature study.

Bair Island is a tidal marsh area composed of three islands: Inner, Middle and Outer, totaling approximately 3,000 acres of former salt ponds in the early 1950’s. The ponds were drained in1965 and on several occasions the island has been used to dispose of dredge spoil from dredging of the Port of Redwood City. Approximately 2,000 acres are within the Bair Island Ecological Reserve on the Middle and Outer islands. The remainder of the islands are part of the Don Edwards National Wildlife Refuge. A large portion of the islands have been restored to tidal wetlands.

The Ecological Reserve is closed annually from Feb 15 – May 20. The adjacent properties owned by U.S. Fish and Wildlife Service are open throughout the year.

Habitats and Animals In the Refuge

Approximately 48 percent of the refuge is comprised of salt ponds most of which are being restored. Plant and animal species found in salt ponds depend on the concentration of salt in the water.  Fish such as topsmelt, goby, and perch thrive in low to moderately salty waters, and the endangered California Least Tern eats them.

About 37 percent of the refuge is made up of salt marsh, brackish marsh, and freshwater marsh. Two endangered species, the California Clapper Rail and Salt Marsh Harvest Mouse rely on tidal salt marsh for their survival.

Mudflats make up 12 percent of the refuge. A handful of Bay mud may contain 40,000 tiny living creatures. The tides bring nutrients throughout the Bay, sloughs and marshes for fish and shorebirds to eat, including zooplankton such as copepods.

700 acres of Vernal pools are short-lived, seasonal wetlands, although the habitat is a small it is a vital part of the refuge. Several species, such as endangered vernal pool tadpole shrimp and Contra Costa goldfields are found only in this type of wetland. Some animals, such as fairy shrimp and other invertebrates remain as dormant eggs throughout the long, dry summers. Adult amphibians such as the California tiger salamander migrate to vernal pools to breed and juvenile salamanders leave the vernal pools as they dry during late spring and early summer. As the pools dry yellow goldfields and purple downingia rim the pools with brilliant color.

Approximately 2 percent of the refuge rises above the salt marsh. In the drier upland habitat, jackrabbits, fence lizards, California towhees, and gray foxes are found.  Coyote brush, oaks and a variety of grasses provide cover for these animals.